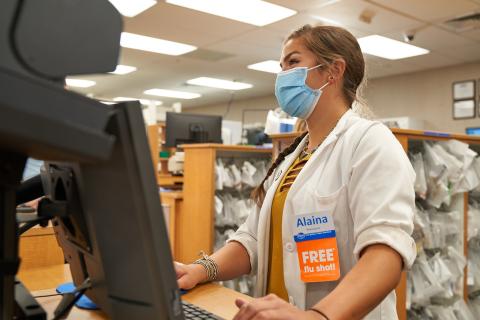 Kroger Health President Colleen Lindholz told The Wall Street Journal that the grocer is getting only a small number of doses, a fraction of what it has the ability to handle.

The Kroger Co. and other grocers want to accelerate their COVID-19 vaccination efforts, but they say they are hitting bureaucratic obstacles.

Kroger Health President Colleen Lindholz told The Wall Street Journal that the grocer is getting only a small number of doses, a fraction of what it has the ability to handle. The company told the Journal it has given about 4,500 doses of COVID-19 vaccinations. On average, Kroger provides roughly 200,000 doses of the flu vaccine each week during flu season.

Inconsistency among state guidelines is causing a slowdown, Lindholz said, adding that she hopes the federal and state governments can come together to create a more uniform plan.

“We’re getting calls just because of the need,” Lindholz said. Kroger says it has been providing shots to health care professionals in its stores and sending staff to long-term facilities in Alaska, West Virginia, Texas and Arkansas.

Kroger also told the Journal it is exploring ways to hold large events in community centers and stadiums that would allow it to vaccinate 600 to 800 people at a time. Lindholz added that the grocer could immunize a tremendous number of people if it had more access to inoculations.

Walgreens Chief Executive Stefano Pessina told the Journal that the chain, with 9,000 U.S. pharmacies, has the capability to do much more than it currently is.

“But we are just an agent for the states,” Pessina said. “We are vaccinating at a pace that is a fraction of the pace that we could be doing. We could do much more as a pharmacy chain if we had a certain degree of freedom.”

Charlie Hartig, CEO at Hartig Drug Stores, told the Journal it has given 100 doses to health care workers and caregivers since last week in three of its roughly 20 stores. While the retailer could be offering more, it wants to follow guidelines strictly, Hartig said.

Stop & Shop told the Journal it is communicating with Massachusetts and other states to learn how its pharmacies can help sooner. Katie Thornell, director of pharmacy operations at Stop & Shop, said she sees opportunities in vaccinating adults ages 75 and up given the grocer’s network of pharmacy locations in the Northeast, adding that the administration will likely happen within stores.

Rite Aid, the third-largest U.S. pharmacy chain, told the Journal that a mounting number of states and other jurisdictions are reaching out to ask for help with administration. The chain has recently given shots to health care workers in New Jersey, Philadelphia, New York City and Delaware.

Vic Vercammen, chief pandemic officer at Giant Eagle Inc., said the retailer is discussing with various states how to repurpose underused spaces such as county fairgrounds and courthouses to set up clinics. Giant Eagle has provided vaccinations in nursing homes and long-term care facilities in West Virginia and is working with Ohio officials to expand immunization efforts.

“We’re not newly deputized, but as various authorities look at the population and see where qualified immunizers are, we’re well positioned to help where we can,” he said.

On Friday Ralphs announced that it had obtained a supply of the Moderna COVID-19 vaccine and has begun administering vaccinations to its pharmacists and ancillary pharmacy staff as well as other health care providers at its 50 pharmacies in Los Angeles and Riverside Counties. There is no cost for the vaccinations.

Additionally, Ralphs Pharmacy locations in San Diego, Santa Barbara and Ventura Counties and City of Long Beach will receive the COVID-19 vaccine the week of Jan. 11.

"Our most urgent priority throughout this pandemic has been to provide a safe environment for our associates and customers while meeting our societal obligation to provide open stores and access to fresh, affordable food," said Dr. Linh Lee, Director of Pharmacy/Health & Wellness at Ralphs. "We are pleased that through our advocacy efforts our frontline associates have been moved to Phase 1B of the COVID-19 vaccine distribution."

The vaccine will roll out to the all 77 Ralphs Pharmacies throughout Southern California and the Central Coast as soon it becomes available through local health departments.

Also last week, Publix Super Markets teamed up with the Florida Department of Health to help distribute vaccinations at its locations in the state.

During a Jan. 5 news conference, Florida Gov. Ron DeSantis announced the collaboration between Publix and the state health department, allowing the retailer to distribute approximately 15,000 doses of the Moderna COVID‑19 vaccine to customers age 65 and older.