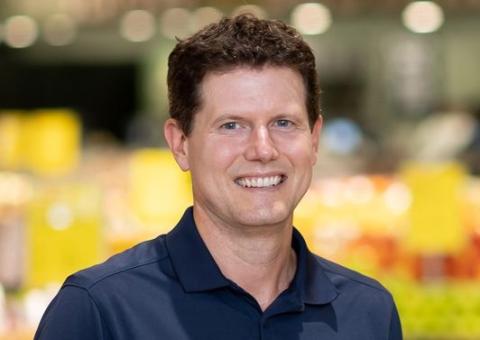 Whole Foods Market plans to open 50 new stores that raise the bar of retail excellence, lead the industry with unmatched quality standards and inclusivity, and offer the best natural and organic shopping experience in the world.

That's the vision laid out by new CEO Jason Buechel, who began his tenure as the third chief executive of the 44-year-old, trailblazing Austin, Texas-based grocer on Sept. 1.

In a letter to Whole Foods Market Team Members, Buechel discussed his childhood in rural Wisconsin growing up in a cheesemaking and dairy farm family, what drew him to a career in food, and what resonated with him the most when he joined the company nearly 10 years ago: a Purpose to Nourish People and the Planet.

"It's not just writing on the wall," Buechel says. "It’s alive in our stores, embedded in our culture, and it serves as our north star. I am excited and honored to carry that forward as your Chief Executive Officer."

Buechel originally joined Whole Foods in 2013 as chief information officer. He had been serving as chief operating officer before founder and former CEO John Mackey announced last year he would retire last month.

Buechel says he has spent this summer on a "Whole Conversations Tour," stopping in every region to listen and learn directly from Team Members.

"We visited stores, volunteered in our communities and deepened connections with our suppliers and foundations," Buechel said. "We brainstormed ideas to shape Whole Foods Market’s future."

Some of those ideas include adding 50 more stores to the company's 534-store footprint.

"Our growth is strong, and we have boundless potential. ... I am dedicated to nurturing the best and most inclusive Team Member experience possible and fostering a store-centric culture," Buechel said. "Together, we’ll set bold long-term goals and build upon our industry-leading standards. Our partnership with Amazon will also enable us to think long term and continuously raise the bar of retail excellence. We are — and will remain — the best natural and organic shopping destination for our customers."

Amazon acquired Whole Foods Market in 2017 in a $13.7 billion deal that is still reverberating through the grocery industry today. Since merging with the e-commerce giant, Whole Foods has cut some prices, rolled out self-checkout and changed the way it offers delivery and pickup. It has also launched Amazon’s cashierless “Just Walk Out” tech in some stores, among other moves.

Buechel says he plans to share more of the retailer's future strategy in early 2023, incorporating many ideas from the Whole Conversations Tour. In addition, he plans to launch a roadshow next year, "where every single store, facility and office will be visited by a member of the E-Team. Going forward, you can also count on hearing from me regularly as I share my thoughts, challenges and inspirations."

Earlier this week, Whole Foods also made news when it announced it has opened another store, this time in the Los Angeles suburb of Culver City, Calif. The 51,413-square-foot location features items that have been hand-picked by Elena Garcia, local forager for Whole Foods’ Southern Pacific Region. Offerings from more than 40 local farms include heirloom tomatoes from Be Wise Ranch, sprouts from Kowalke Organics and watermelon from Valpredo Farms. A specialty department also pays homage to cheesemakers and artisan producers such as Central Coast Creamery, Gusto and Di Stefano Cheese.

The location’s design highlights community staples, including artwork of the Baldwin Hills Overlook and a bird’s-eye-view painting of Culver City. The beer and wine selection will also pay homage to local makers, with offerings such as Fresh Pils of LA from Common Space Brewery and wine offerings from DAOU Vineyards, Turning Tide Wines, Ancient Peaks Winery and Field Recordings Winery.

A full-service meat counter, a full-service seafood counter, a bakery and a prepared food section will also be available to shoppers. The Cul Bar taproom will have 24 beers on tap and offer indoor and outdoor seating in addition to happy hour and daily specials.

The Culver City store is the latest in a string of Whole Foods locations to open their doors this summer. Other outposts have cropped up in Grand Rapids, Mich.; Woodcliff, N.J.; Pittsburgh’s East Liberty neighborhood; and the NoMad neighborhood of New York City.

The first certified-organic national grocer, Austin, Texas-based Whole Foods has more than 500 stores in the United States, Canada and the United Kingdom. The company is a wholly owned subsidiary of Seattle-based Amazon, which is No. 2 on The PG 100,  Progressive Grocer’s 2022 list of the top food and consumables retailers in North America.