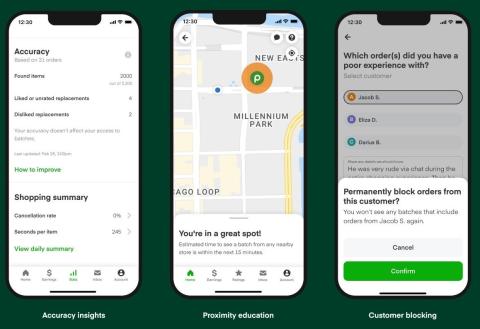 Instacart now allows shoppers to block customers that they would no longer like to be paired with, among other options.

To help make the shopper experience more helpful and fair, Instacart is introducing new features and reimagining its customer ratings system. The updates are based on direct shopper feedback and are part of Instacart’s four-month rollout of new commitments to its shopper community.

In the past, prioritization of orders was based on having the highest rating possible, but with the update, shoppers will now need to maintain a 4.7 average rating or above for that prioritization. The company is also forgiving more ratings for reasons that are outside a shopper's control, including if a customer consistently rates shoppers below 5 stars.

"Our reimagined ratings system was developed in close collaboration with the shopper community to better support their needs," said John Adams, VP of shopper and fulfillment product. "It's incredibly important to us to nurture a community built on best intent — deepening the trust between shoppers, customers, and all of us at Instacart. By delivering on shopper feedback to make the customer ratings system even more fair, accurate, and reliable, we're taking another step in ensuring that shoppers feel heard and supported through their experience."

Shoppers can also now see text in the app that tells them when they are close enough to a store location to see available batches. The app may also show other nearby store locations that have higher order availability.

Additionally, shoppers will have access to order-level feedback after each batch they complete and can share if they had an issue with a customer and would no longer like to be paired with them. Shoppers will also have the ability to block rude customers from their orders moving forward.

Instacart is in the midst of a four-month initiative to introduce new features and updates for its shoppers based on direct feedback. March had "support while you shop and beyond" and "ingredients to earn on your terms" was rolled out in April. The company’s commitment to "recognition and rewards for the best of the bunch" will be recognized in June.

The company also recently announced that it has confidentially submitted a draft registration statement on Form S-1 with the Securities and Exchange Commission (SEC). The SEC Form S-1 is required for U.S. companies that seek to be listed on a national exchange, typically filed in advance of an initial public offering (IPO). With this piece in place, Instacart’s long-rumored IPO could happen by the end of 2022.

San Francisco-based Instacart currently works with more than 750 national, regional and local retail brands to facilitate online shopping, delivery and pickup services from more than 70,000 stores across more than 5,500 cities in North America.