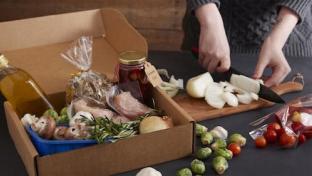 HelloFresh posted a 120% year-over-year revenue gain in the third quarter, reaching $1.13 billion — another sign of how the meal kit industry has grown during the pandemic.

The meal kit provider said the quarter saw the continued strong engagement by active customers as well as an increase of new customers.

Both operating segments (US and International) more than doubled their revenue compared to the same period in the previous year. While the International segment grew 131.5% based on constant currency, the US segment grew 124.7%, despite facing continued capacity constraints throughout the quarter.

“The trend towards eating more meals at home accelerated during the pandemic and we consider the key drivers for this to have become permanent,” said says Dominik Richter, CEO and co-founder of HelloFresh. “Consumers will continue to rely on e-commerce to shop for food in a safe and convenient way and additionally, they will continue to work from home and therefore eat more meals at home. We see this trend reflected in our continued strong customer growth and consistently higher customer engagement across all markets, despite COVID-related restrictions being lifted during Q3.”

In the U.S., the company in Q3 donated more than 4.1 million pounds of surplus food, equivalent to 3.47 million meals were donated to food banks. Additionally, HelloFresh US has donated over 500,000 meals specifically designed for the food insecure as part of its "Beyond the Box" program to communities near the company’s operations in New York and New Jersey.

In late October, rival meal kit provider Blue Apron said that its net revenue for the third quarter of 2020 increased 13% year over year to $112.3 million — thanks in part to pandemic ordering.

HelloFresh SE operates in the United States, the United Kingdom, Germany, the Netherlands, Belgium, Luxembourg, Australia, Austria, Switzerland, Canada, New Zealand, Sweden, France and Denmark. The company is No. 88 on The PG 100, Progressive Grocer’s 2020 list of the top food and consumables retailers in North America.