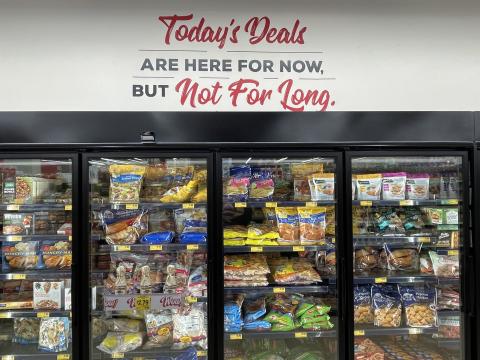 Grocery Outlet will have a new CEO to lead it through the next stage of its plan to open as many as 5,000 stores across the United States.

The company announced on Nov. 8 that R.J. Sheedy, currently the company's president, will become president and CEO on Jan. 1. Current chief executive Eric Lindberg will transition to chairman of the board, also on Jan. 1. Lindberg had been with the retailer for more than 17 years.

Sheedy also will be appointed to the board, and Erik D. Ragatz, currently chairman of the board, will assume the role of lead independent director.

"I am honored to serve as the next CEO of Grocery Outlet, succeeding Eric, who has demonstrated great leadership and vision. The company has experienced tremendous growth and transformation during his tenure, and I look forward to working with Eric for many more years to come," Sheedy said. "For over 10 years, I have had the privilege of working with the incredibly talented and committed group of independent operators and employees at Grocery Outlet. I am excited to continue working closely with them to provide even better value to our customers and extend our mission of Touching Lives for the Better in both existing and new geographies. I am eager to lead Grocery Outlet forward as we strive to realize our tremendous growth potential."

Sheedy brings more than 20 years of experience in the grocery and retail industries. He joined Grocery Outlet in 2012 and has served as the company's president since 2019. Throughout his tenure at Grocery Outlet, Sheedy has served in leadership roles overseeing purchasing, marketing, supply chain and strategy.

"There is no one better to lead Grocery Outlet into the next chapter of growth than RJ Sheedy. He is a strong business leader who takes a long-term strategic approach, which will position Grocery Outlet for continued success," Lindberg said. "RJ's leadership style exemplifies our culture and values, he is passionate about the business, and his relentless pursuit of excellence resonates with and inspires our team. I am immensely grateful for the opportunity to have led this remarkable group of people for the past seventeen years, and I look forward to working closely with RJ and the management team in my future role as Chairman."

The announcement came on a day that the company reported outstanding earnings. For the third quarter ended Oct. 1, net sales at Grocery Outlet increased by 19.4% to $918.2 million as inflation weary shoppers flocked to the off-price grocery retailer.

Same-store sales increased by 15.4% and on a 3-year stacked basis increased by 20.2%. The company opened six new stores, ending the quarter with 431 stores in eight states.

Last year in an exclusive interview with Progressive Grocer, Lindberg said he believes the United States could support nearly 5,000 Grocery Outlet stores. The likelihood of that happening revolves around the fact that the company doesn’t have store managers; instead, it has independent owner-operators.

“The best way for anyone to understand what we do is just walk into a store and ask for the operator and talk to them,” Lindberg said. “It is the difference between managing a store and owning a business. We think we are providing the American dream in the form of running a business, with the best of two models coming together.”

Grocery Outlet went public in June 2019, and since then has maintained the view that it can open at least 1,900 stores in existing and contiguous states. Over the long term, the company believes that the market potential exists to establish at least 4,800 locations nationwide.

Lately the California-based company has been focused on growing its footprint in the Northeast.

The special edition inflation RPI report is part of an ongoing series published by dunnhumby and is available online.