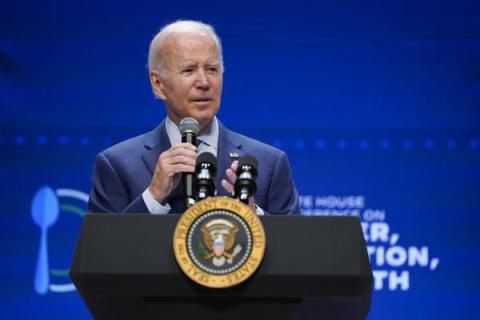 During the Sept. 28 White House Conference on Hunger, Nutrition and Health – the first of its kind held since 1969 – President Biden announced a goal to eradicate food insecurity among Americans by 2030 and stem diet-related conditions such as obesity, diabetes and hypertension. Those objectives are central to the conference’s five pillars of action: Improve Food Access and Affordability; Integrate Nutrition and Health; Empower Consumers to Make and Have Access to Healthy Choices; Support Physical Activity for All; and Enhance Nutrition and Food Security Research.

Speaking in Washington, D.C. in front of an audience of at least 500 people representing business, civic, academic and local government groups, Biden pointed out that one in 10 Americans don’t have enough food to feed their families. “This is something we should be all rallying the whole country to work on together,” he declared, adding, “Meeting our bold goals requires a whole government approach … and a whole-of-society effort.”

On that point, the Biden Administration is engaging grocers and CPGs as central parts of its plan to combat hunger and chronic diet-related illness. In the first pillar of improving food access and affordability, National Grocers Association (NGA) shared that it will expand access to full-service grocery stores and double the number of retailers offering SNAP benefit online, while the FMI - the Food Industry Association, announced that it will mobilize its members to donate 2 billion meals in 2023 to food banks and other anti-hunger groups, among other measures.

Grocers contributing to this pillar include Hy-Vee of Des Moines, Iowa, which noted that it plans to deliver 30 million meals to vulnerable communities by 2025, and Florida-based Publix, which committed to donating $3.85 million to 22 Feeding America food banks and hosting a national hunger summit with that nonprofit group. Walgreens updated its commitment to increasing the assortment of fresh foods in its stores by 20% by 2030. Delivery services Shipt and DoorDash also mapped out their proposed actions, while food suppliers Bowery, Chobani and Nayak Farms highlighted their respective measures to shore up food security.

In addition, grocery businesses disclosed ways in which they are working towards the second pillar of empowering consumers to make healthy choices. Boise, Idaho-headquartered Albertsons Cos. pledged to help 50,000 eligible community members enroll in SNAP and WIC benefits; to communicate 50 million evidence-based suggestions for improve nutrition to its online customers; to introduce 1,000 new nutritious recipes; and to sponsor local community service projects on nutrient education.

Michigan-based Meijer, for its part, disclosed that it will offer a rolling set of automatic dollar-off and percentage-off discounts – from $5 to $10 and 5% to 10%, respectively – on SNAP purchases of qualifying fruits and vegetables. Instacart provided input as well, detailing the launch of a major new health and nutrition initiative that spans new products, partnerships and services; Instacart also shared that it will work with the U.S. Department of Agriculture to incorporate SNAP into its online platform. Also sharing their specific commitments to this pillar of action: Danone, Dole Packaged Foods and Tyson Foods, which is investing $255 million in anti-hunger charities to boost access to nutritious protein products in underserved and rural communities.

More details about the conference and participating business and industry organizations is available on the White House website.