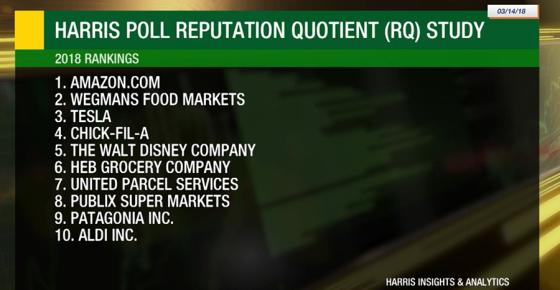 Food retailers were well represented in the 2018 Harris Poll Reputation Quotient (RQ) study: Seattle-based ecommerce behemoth Amazon ranked highest in the 100-strong listing, with an RQ of 83.22, while Rochester, N.Y.-based Wegmans Food Markets, came in second, with an RQ of 82.75. In all, five grocery purveyors made the top 10, while none showed up in the bottom 10.

“We are so thankful for our employees, who make it possible for Wegmans to be recognized in this way,” said Wegmans President Colleen Wegman. “They make us proud and very grateful for the reputation they have earned on our behalf.”

'Reputation is a Verb'

The annual study, which has been undertaken since 1999, begins with a nomination phase to identify 100 companies with the most “visible” reputations, according to the perceptions of the general public. The final list is measured in the RQ Ratings Section. This year’s rating interviews occurred online Dec. 11, 2017-Jan. 12, 2018 among 25,800 U.S. adults to obtain an average of about 300 ratings per company.

“The RQ 2018 study reveals that consumers are increasingly interested in what a company stands for, how they engage with society and their community,” noted John Gerzema, CEO of The Harris Poll, also based in Rochester. “In this new world, reputation is a verb.”