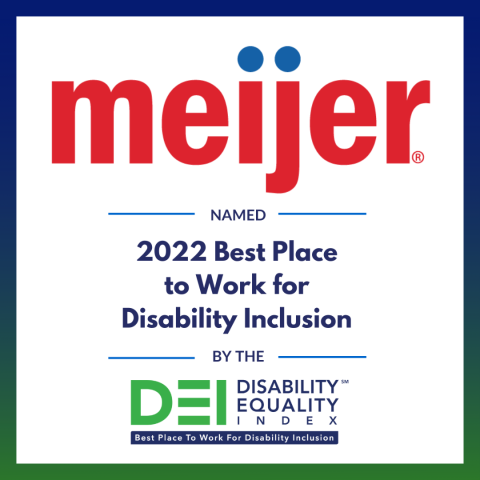 The disability community has long been a part of the grocery community, as retailers have continually fostered an inclusive workplace. The American Association of People with Disabilities (AAPD) and Disability:IN recently recognized dozens of U.S. companies, including several retailers, for their efforts in providing a particularly strong culture of dignity and respect among their teams.

The groups’ Disability Equality Index (DEI), a benchmarking tool that scores companies’ actions toward disability inclusion, is the basis for the annual “Best Place to Work for Disability Inclusion" list, released this week. Several grocers earned a 100% score on this year’s DEI.

This is the sixth time that Michigan-based Meijer received the distinction. “We appreciate the ongoing recognition of our efforts to sustain a culture of inclusion that celebrates and supports our team members and customers with disabilities,” said Timothy Williams, Meijer’s VP of diversity and inclusion. “So much of our success is a direct result of the passion our team members bring to supporting the disability community across our six states, especially through the Meijer Disability Awareness and Advocacy Group.”

According to Williams, Meijer’s team member resource group “mDAAG” was formed to advance diversity and inclusion and held many in-person and virtual events throughout the year. In 2020, the resource group was the catalyst for Meijer’s partnership with Aira to provide blind and low vision customers free access to the live visual support app in all its stores, making Meijer one of the first retailers in the Midwest to offer such a service.

“Giant Eagle’s commitment to successfully employ people of all abilities is one of the best parts of our culture,” remarked Jeremy Shapira, Giant Eagle’s VP and chief diversity, equity and diversity officer. “Our work to be even more inclusive will never be done, but we’re successful because our team has heart. We care about each other and our neighbors, and we firmly believe that everyone deserves respect and equal opportunity to thrive.”

Maria Town, president and CEO of AAPD, said that companies receiving top scores for their efforts have taken innovative approaches to their respective workforce and culture. "There is no single best way to practice disability inclusion. However, the companies taking the DEI share the desire to create a workplace that fosters the concept of bringing your whole self to the office," Town said.

Added Jill Houghton, president and CEO of Disability:IN: “This year’s Disability Equality Index shows us that there is a broad arc to the disability inclusion story. Across industries and sectors, we see more companies moving from accommodating people with disabilities to embracing inclusion as a corporate ESG value. Our data suggests the future of inclusion lies in reconfiguring corporate strategy to foster universal belonging.”

According to Disability:IN, a record 415 companies took part in the 2022 DEI, up from 319 companies last year. Among other trends, this year’s submissions reflected growing disability inclusion in leadership teams, boardrooms and suppliers.

Privately owned Meijer operates more than 260 supercenters and grocery stores in Michigan, Ohio, Indiana, Illinois, Kentucky and Wisconsin. The Grand Rapids, Mich.-based company is No. 20 on The PG 100, Progressive Grocer’s 2022 list of the top food retailers in North America. Pittsburgh-based Giant Eagle operates more than 470 stores throughout western Pennsylvania, Ohio, northern West Virginia, Maryland and Indiana. The company is No. 36 on The PG 100.