The smell of fragrant smoke and juice dripping on skewers isn’t always from steak or chicken. Grilling fruits and vegetables to accompany meat, top a salad, create dessert — or even as the main course — is good for summer produce sales.

Almost any kind of fruit or vegetable can be grilled and enjoyed. As consumers continue to search for healthy options, produce departments can offer the answer and, in the summer, that can mean grilling, along with items like freshly made salsa.

Grill for a Thrill

Grilling continues to be a hot trend with customers as a time for family and friends to gather.

“Grilling fruits and vegetables, including some surprises like grilled romaine, should continue to be popular [this summer] — why heat up the kitchen if you already have the grill going?” says Kathy Means, VP of demand creation and consumer affairs for the Newark, Del.-based Produce Marketing Association. “Also, as consumers look at plant-based diets, mushrooms as a meat substitute or blend are growing in popularity. So we can expect to see more mushroom burgers or mushroom-blend burgers on the barbecue.” 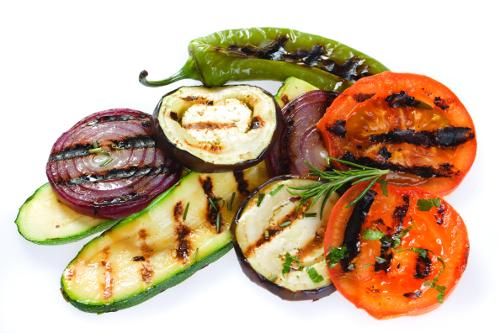 Biting into a ripe peach with the juice running down your chin may sound like the ultimate way of enjoying the beloved fuzzy fruit, but there also are other options. Advise shoppers that grilling peaches is an easy task, and they can be used in everything from salad to dessert. The fruit caramelizes when grilled, bringing out more of its sweetness. Remind shoppers that when choosing a peach for grilling, make sure it’s soft but not too soft, with a slight give to the flesh, and they should smell it for freshness.

Supermarket promotions for grilling naturally link meat and produce together. “We tie in with the meat department when they have a grilling sale,” notes Jay Schneider, produce director for Malvern, Pa.-based Acme Markets, a division of Albertsons Cos. “Maybe asparagus tied in next to a steak display with tray pack corn on the cob nearby.”

“Almost every vegetable is up for grilling,” asserts José Padilla, produce and floral operations coordinator for grocery wholesaler Krasdale Foods, based in New York. “We will be pushing tons of local vegetables. Whether it’s squash, eggplant, cauliflower, tomatoes, pepper, corn — all can be barbecued!”

Spicy Salsa as a Side Dish

Summer is a great time for creating new combinations of fruits and vegetables for salsas. While traditional salsa is made with tomatoes, onions and hot peppers, there are many recipes for fruit and vegetable salsas which can be used as a condiment, garnish or topping for a variety of foods such as fish, baked potatoes or rice.

Almost any fruit or vegetable can be added or combined for freshly made salsa, with or without hot peppers. Vegetable salsas can crown or stuff an omelet or a pita sandwich, while fruit salsas can top yogurt or serve as a dip for fresh fruit.

Both vegetables and fruit can accompany cottage cheese, grilled chicken, fish, pork or beef, according to Fruits & Veggies — More Matters, an initiative of the Brentwood, Mo.-based Produce for Better Health Foundation.

However they’re prepared, salsas are a low-fat, low-calorie way to enjoy summer produce that grocers should encourage consumers to try.

Padilla says that he sees more people slicing cauliflower and eating the vegetable like a hamburger. Meanwhile, fruit such as pineapples; stone fruit (peaches, nectarines, plums, pluots); and even melons are fit to be grilled, he points out. The grilled fruit can be glazed with brown sugar and topped with a scoop of ice cream, or combined with other ingredients such as prosciutto. “From a marketing perspective, we will be calling out produce items that are good for barbecuing with a flamed-charcoal logo,” Padilla notes.

“People are looking for more healthy options, and grilling is a great way to unleash a new flavor from an old favorite,” says Chris Van Parys, Lowes’ VP, fresh merchandising. “In our Pick & Prep area, we sell combinations already on the skewer and ready for the grill, such as sweet onions, brown and portabella mushrooms, squash, and bell peppers. Fruit items that can be grilled include grape and Roma tomatoes, pineapple, peaches, plums, nectarines and even avocados.”

Van Parys recommends a touch of olive oil with vegetables, and a balsamic glaze with fruit. Grilling halves of Brussels sprouts dipped in olive oil, coarse ground sea salt and crushed pecans is delicious, he adds.

One produce item that many consumers have already been grilling for years is onions. A particular favorite is Vidalia onions. John Williams, sales manager for L.G. Herndon Jr. Farms, in Lyons, Ga., has 600 acres of Vidalia onions out of 3,500 total acres, where corn is also grown. Williams recommends grilling Vidalias on skewers with bell peppers and mushrooms. Onions can also be placed in grill baskets or trays, or tented in aluminum foil.

What Else is on the Plate This Summer?

Predictions for summer 2018 are that traditional produce menu items will remain strong, according to Kathy Means, VP of demand creation and consumer affairs for the Newark, Del.-based Produce Marketing Association (PMA). Summer will bring berries and melons, salad greens and toppings, fresh and cooling citrus as a fruit and as an ingredient, and favorites like potato salad and cole slaw, to tempt the palate.

Means is seeing greater creativity in produce combinations such as salads with both fruits and vegetables, dishes full of color and flavor, and mixing any kind of fruit or vegetable to get a new flavor profile. As far as other specific fruits and vegetables, cauliflower in many forms is still popular, she observes, and the jackfruit trend is continuing. For those unfamiliar with jackfruit, it’s sometimes used as a replacement for pulled pork in vegan recipes. Not only is it the world’s biggest tree fruit, often described as having a taste somewhere between a banana and a pineapple, but the seeds are edible as well.

Meanwhile, cherries are Jay Schneider’s most popular summer display. The produce director for Malvern, Pa.-based Acme Markets, a division of Albertsons Cos., notes, “Cherries really kick off the summer as we head into Memorial Day, and signify the summer selling season.”

Further, when consumers think of summer, especially on a sweltering day, watermelon comes to mind, he observes: “Pre-cut watermelon bowl sales in various sizes continue to increase in sales every year.” Consumers are moving toward convenience, now more than ever, he points out, and pre-cut fruit is a perfect fit for time-starved customers.

“Nothing says summer like peaches, so you want to promote peaches all summer long,” asserts Will McGehee, sales manager at The Genuine Georgia Group LLC, and marketing director for the Georgia Peach Council. His family has worked the Pearson Farm, 90 miles south of Atlanta, since 1888, and McGehee himself is a fifth-generation Pearson. 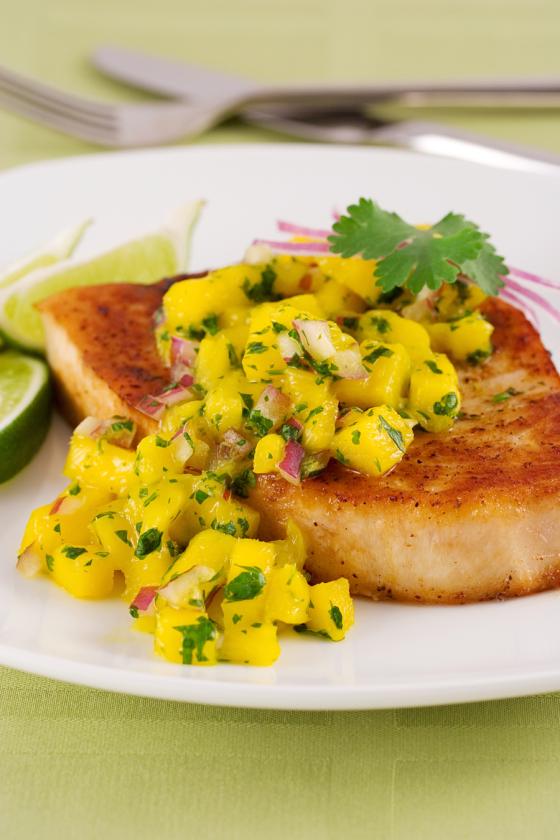 According to the 2017 consumer survey for the Arlington, Va.-based Hearth, Patio & Barbecue Association, nearly one-third of consumers (29 percent) planned to use their grill or smoker more often. Summer holiday weekends bring the highest usage, with 73 percent of consumers grilling on July 4, 60 percent on Memorial Day, 58 percent on Labor Day, and 45 percent on Father’s Day. Mother’s Day and Easter are also popular grilling occasions.

Many consumers grill year-round, however. Parties (49 percent), camping (24 percent), a vacation home party (21 percent), and tailgating at sporting events (11 percent) aren’t just opportunities for the meat department. Planning promotions and demos around holidays can show consumers the tastes that fruits and vegetables can bring to grilling.

Grilling fruits and vegetables can be a healthy meal addition or great stand-alone. There are other healthy pluses to consider, according to the Fruits & Veggies — More Matters Health initiative from the Brentwood, Mo.-based Produce for Better Health Foundation:

By promoting the grilling of fresh fruits and vegetables this summer, produce departments can become a destination for customers looking for healthy options in a different way. Some customers may need instruction in grilling. If you provide it, you’ll reap their sales and loyalty. 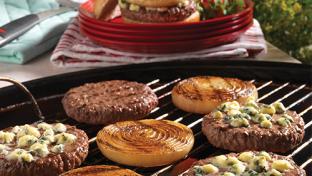 Grilling
Summertime Grilling Essentials for You, Your Customers 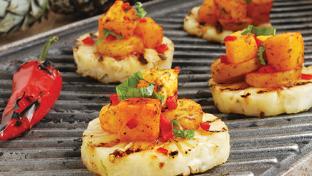 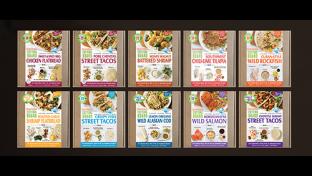 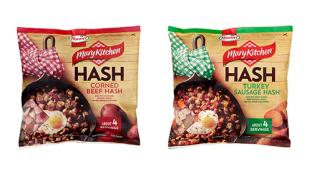 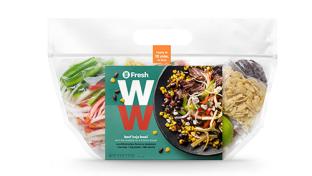