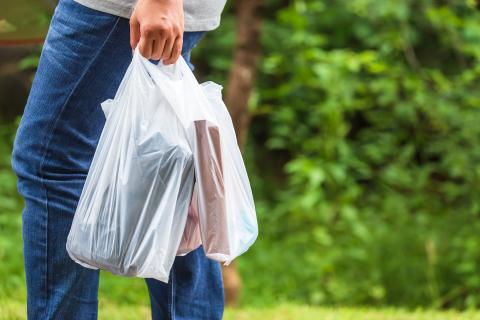 Giant Eagle is renewing its commitment to removing single-use plastic bags from its stores in two markets.

In honor of Earth Day, Giant Eagle will relaunch its effort to eliminate single-use plastic bags across its operations, beginning with stores in Cuyahoga County, Ohio, and Erie, Pa.

The retailer previously removed plastic bags from its Cuyahoga County supermarkets in December 2019 but later reintroduced them because of the pandemic. With the renewed effort, shoppers who use reusable bags in those two markets will be entered into a monthly sweepstakes for the chance to win $10,000.

Reusable bags will be available for purchase for $0.99, and Giant Eagle will charge $0.10 for each paper bag used. Shoppers using government-funded food purchase assistance will not be charged the paper bag fee.

The company plans to roll out the initiative to other regions in the coming months.

Similarly, local bans in Virginia caused Wegmans to remove single-use plastic bags from several of its stores at the beginning of the year. Foodservice operators in Washington state must also abide by a new law that restricts the use of plastic utensils, cocktail picks/stirrers, straws and condiment cups and packets. A similar ban has also taken effect on the Hawaiian island of Maui.

With almost $10 billion in annual sales, Pittsburgh-based Giant Eagle operates more than 470 stores throughout western Pennsylvania, Ohio, northern West Virginia, Maryland and Indiana. Giant Eagle was recently included in Progressive Grocer’s Top 10 Regional Operators to Watch. The company is also No. 37 on The PG 100, PG’s 2021 list of the top food and consumables retailers in North America.