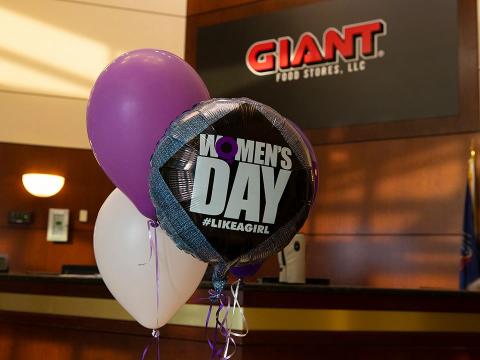 Giant is giving $50,000 to five local YWCA chapters to support their missions of eliminating racism, empowering women and promoting peace, justice and freedom.

The Giant Co. is joining other grocery retailers in stepping up efforts to elevate the issues of diversity and inclusion.

Giant is awarding $100,000 to six groups as part of its overall $500,000 commitment toward local community organizations dedicated to racial equality and advancing diversity and inclusion.

Giant is giving $50,000 to five local YWCA chapters to support their missions of eliminating racism, empowering women and promoting peace, justice and freedom. YWCA Lancaster is receiving a $25,000 donation towards its new Center for Racial and Gender Equity, which will focus on community engagement, training and education, and research and advocacy throughout Lancaster County. Giant has been named a founding partner of this center.

“Each of these organizations is working toward creating healthier communities through the advancement of racial equality and equity, something that the Giant company strongly supports,” said Aaysha Noor, head of diversity and inclusion, Giant Co. “We are honored to be partnering with these organizations to create a better, more equitable tomorrow for our shared communities. Together, we will effect long-lasting change and make a difference.”

Other YWCA recipient organizations include:

This latest announcement is the second in a series of donations made by the company to support the communities it serves. In October, Giant Co. announced a total of $250,000 in funding to Urban League of Philadelphia, Boys & Girls Clubs, HACC, Central Pennsylvania’s Community College and NAACP Pennsylvania. This investment is part of a $5 million commitment made by parent company, Ahold Delhaize USA, to support racial equality and diversity and inclusion efforts.