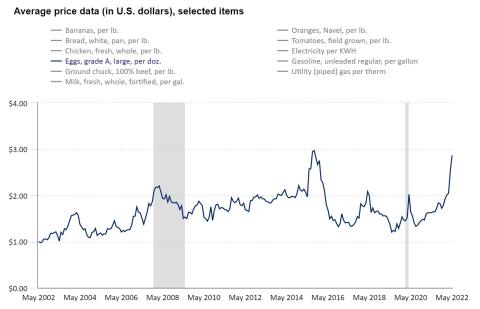 Beleaguered shoppers, grocers and others who provide food and consumables didn’t get the better news they wanted from latest inflation report released by the U.S. Bureau of Labor Statistics (BLS). The total consumer price index (CPI) rose a full 1% in May following a 0.3% hike in April, with food costs as a major contributor. Even in this inflation-defined year, that rate was higher than expected by many economists.

All of the main grocery categories were higher in May, according to Labor Department data. The CPI for eggs rose 5%, while dairy product prices were up 2.9%, nonalcoholic beverages shot up 1.7% and cereals and bakery increased 1.5% after ticking up 1.1% in April. Right at the start of grilling season, the index for meats, poultry, fish and eggs came in 1.1% higher, while fruits and vegetables reversed the previous month’s decline for a 1.6% increase.

Stacked against this time last year, the CPI for meats, poultry, fish and eggs topped 14.2% and, within that sector, eggs soared 32.2%. Five of the six major grocery food group indexes grew more than 10% versus May 2021.

Retailers with fuel operations also had to contend with another major bump in prices during May. The CPI for gasoline rose 4.1% for the month and a whopping 48.7% on a yearly basis.

With BLS data showing that inflation has not cooled off, speculation is rising that the Federal Reserve is poised to raise interest rates. Ahead of the midterm elections, the Biden Administration is also weighing its options to try to tamp down prices or at least stem the monthly increases. Meanwhile, in tandem with the steady price hikes so far this year, consumer sentiment continues to fade: The Conference Board’s Consumer Confidence Index dropped last month amid worries about higher food and energy costs.