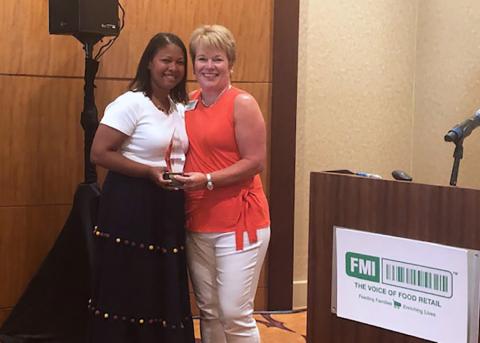 TheFood Marketing Institute (FMI) has presented the 2019 Donald H. MacManus Award to Tanya Triche Dawood, VP and general counsel for the Illinois Retail Merchants Association (IRMA), in recognition of her achievements in public and regulatory affairs. Dawood received the award at FMI’s State Issues Retreat, an annual event bringing together food retail grocery associations and grocery company professionals from each state to discuss state legislative issues of interest to the food industry. This year's retreat is in Denver.

Most notably, Dawood worked tirelessly to repeal the Cook County sweetened-beverage tax, filing a lawsuit just days before the tax was to go into effect. The judge granted the motion for a temporary restraining order, which delayed collection of the tax and bought Dawood and her coalition partners time to explain to the county Board of Commissioners the economic harm that the measure would cause consumers, retailers and manufacturers.

She also led the initiative to change Chicago’s plastic bag ban to a customer-paid fee for all bags, and quashed the Windy City’s bid to ban polystyrene foam, as well as similar efforts in the suburbs. Among Dawood’s other achievements were heading the push to prevent Chicago from implementing onerous regulations on hiring practices, and thwarting the city’s move to give part-time employees full-time status in an upcoming employee scheduling law.

Dawood additionally wrote and passed Illinois’ first organized retail crime law and spearheaded the effort on behalf of the employer community to repeal Chicago’s “head” tax  — that is, the practice of charging employers of 50 or more full-time workers a certain amount per employee.

“Tanya shares similar attributes to Donald MacManus, with her steadfast focus on the people and policies that build stronger communities,” noted Leslie G. Sarasin, president and CEO of Arlington, Va.-based FMI. “She remains fiercely effective and committed to accomplishing any task in front of her, all while building relationships that champion the greater goals of the food retail industry.”

Dawood joined Springfield-based IRMA as a staff attorney in 2008 and took on her current role in 2014. She directs the activities of the Chicago Retail Merchants Association, advocating on behalf of the retail industry in Chicago’s City Hall and in front of the Cook County Board of Commissioners. Dawood also lobbies for the Illinois Food Retailers Association and serves on several government-related committees and task forces, as well as managing IRMA’s involvement in legal matters on behalf of its membership.