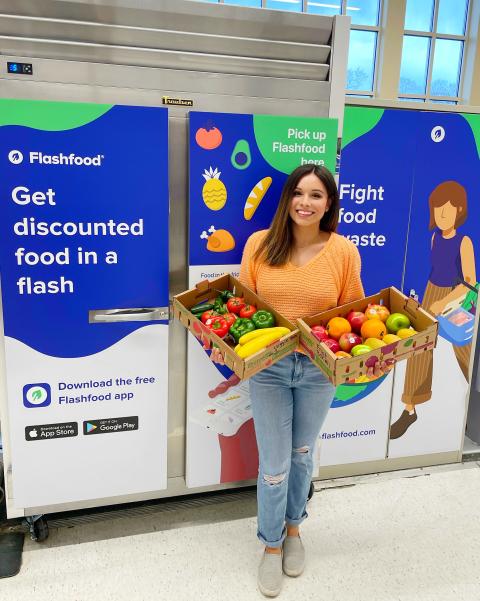 Flashfood is currently available in 1,400-plus stores across the United States and Canada.

Flashfood, a digital marketplace that connects consumers to heavily discounted food nearing its best-by date, has reached a major milestone: 50 million pounds of food diverted from landfill, and 95 million pounds of carbon dioxide equivalent (CO2e) – the equivalent of more than 38,000 transatlantic flights – saved from the atmosphere.

Rather than ending up in landfill, those Flashfood purchases fed the equivalent of an entire fan-filled sports stadium for more than three months. The milestone was achieved in the wake of the company’s rapid North American expansion.

Flashfood, which revealed the news on the first day of the Groceryshop 2022 Conference, is currently available in 1,400-plus stores across the United States and Canada. Since January 2022, the company has added more than 200 stores in partnerships with Stop & Shop, Giant Food, Giant Eagle, Food Lion, Family Fare, VG’s, Meijer, Giant Co. and Loblaw Cos., and secured $12.3 million in Series A funding, which increased the company’s ability to deliver impact for shoppers, retailers and the planet. So far, the company has saved consumers more than $120 million on their grocery bills, helping regular shoppers save an average of more than $540 per year.

“This year, we set out to rapidly expand Flashfood’s footprint and accelerate our impact with new and existing partners,” said Josh Domingues, CEO and founder of Toronto-based Flashfood, a free app available on iOS and Android. “Not only did we add hundreds of stores to our marketplace, but we invested in our technology to just about double our impact in less than a year. With hundreds of new stores coming online this fall in the northeastern United States, our team is focused on quickly scaling our impact to feed more families affordably in light of inflation.”

The Flashfood app enables consumers to browse deals on fresh food items that are nearing their best-by dates. Purchases are made directly through the app, and shoppers then pick up their orders from the Flashfood Zone inside their participating grocery store.

Flashfood is currently focused on expanding its footprint with existing partners and will make the app accessible to more shoppers with new payment options launching this fall.