Retailers know as well as anyone, however, that one solution can’t wipe out the average 8% of unavailable items in grocery that has remained consistent year after year. There’s a rigid dichotomy between the promise of technology and execution.

With the expansion of online grocery, the importance of inventory management skyrockets. Jeff Kennedy, president and CEO of Des Moines, Iowa-based Itasca Retail, shares the story of a woman who placed an online order for laundry detergent from her local supermarket and instead received cat litter. This unacceptable substitution greatly alters the shopper’s experience with grocery ecommerce and the brick-and-mortar store.

Robots in All Forms

Robots are no doubt some of the most buzzworthy advancements in technology, although narrow aisles, deep shelves, refrigerator and freezer doors, fresh displays, and more can all be potential challenges for these automated systems.

Companies such as San Francisco-based Bossa Nova Robotics, however, have started to improve their robots’ capabilities. Bossa Nova 2020 exhibits a slimmer profile than the previous version, has 16 cameras and offers what the company calls “complete store coverage,” from fresh to freezer, and everything in between.

At NRF, Bossa Nova — fresh off a deal with Bentonville, Ark.-based Walmart to enter 650 more of its stores, for 1,000 total locations — demonstrates its real-time scanning capabilities and integration of the data into its dashboard. Atlanta-based NCR is handling all of the deployment.

“We’re closing the gap between the dream and the store,” says Tim Rowland, CEO of Nicholasville, Ky.-based Badger Technologies. “Our mission is to deliver real-time data to the retailer to take action.”

According to Rowland, the top three pain points that Badger Technologies first aimed to solve were out-of-stocks, planogram intelligence and pricing. Now, some clients, including Ahold Delhaize USA, have requested additional functions such as making sure that stores are clean by alerting associates to spills.

Rowland says that very conservatively, Badger Technologies’ system can save $150,000 in lost sales from out-of-stocks alone each year, which is three and a half to four times what the robot costs for that time period.

Instead of roaming the aisles, Addison, Texas-based Deming Robotics by Spacee has a solution that uses a modular rail system at the shelf’s edge to scan both sides of the aisle — or using a bird’s-eye view in produce — for out-of-stocks and planogram compliance. This system scans every 15 minutes and is essentially invisible to the customer.

Austin, Texas-based Pensa’s mode of implementation is a small autonomous drone using computer vision and artificial intelligence to tackle on-shelf inventory visibility. It visually scans and recognizes the products on a shelf, knowing when items are facing in the wrong direction, or in the wrong spot.

Grocery is largely behind other online entities when it comes to inventory. An up-to-the-minute perpetual inventory is far from standard for most grocers.

“Perpetual inventory in grocery has historically been a redheaded stepchild, maybe necessary evil, depending how you want to look at it, in the sense that grocers want to be able to do it, but there’s reasons that it’s difficult,” says Jason Wirl, director of solutions consulting at Itasca Retail. “One [reason] is just the human factor of it. Often, there’s lots of turnover, especially part-time, of course, in grocery. Then there’s also that in certain areas of the store, it’s easier than others.”

Direct store delivery, perishables and prepared foods are no longer off the table when it comes to computer-generated ordering (CGO). If employees do the upfront legwork that they’re already doing with inventory — and they do it well — CGO is the next logical step, which saves employees time by no longer requiring them to review each order line item by line item.

Itasca Retail works with Rochester, N.Y.-based Wegmans Food Markets, where a recent success with real-time inventory has helped the grocer put the freshest lettuce on its shelves.

“Wegmans, before we signed them, had tried computer-generated ordering three times, and it failed,” Wirl recounts, “And, credit to them, they were like, ‘No, this is really necessary, and we need to figure this out.’”

For Wegmans, it all started with bagged salads, Wirl explains. The grocer was seeing more out-of-stocks and lack of freshness in the category, so it seemed right to implement a new system.

Instead of sending the manufacturer a forecast and having it figure out how much lettuce to send back, Wegmans worked with its growers and shippers and submitted individual, computer-generated orders for each store.

“The lettuce comes to the dock at the distribution center and then it goes from the supplier truck to the store truck,” Wirl notes, adding that it no longer sits in the warehouse. “The result of this was five days of extra time on the shelves. Instead of grabbing a bag of salad that says you’ve got three days at home, all of a sudden, you have eight days at home.” 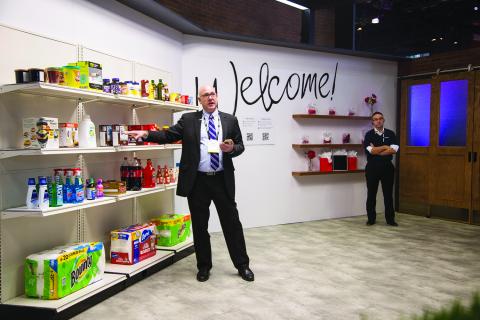 At the NRF Show, Toshiba demonstrated its fully frictionless store experience, emphasizing various technology components that can be implemented in stores now for inventory control.

There’s great value in real-time data because it’s needed to generate an accurate order, and although it’s good to know with computer vision when something is out of stock, it’s even better to be proactive so as to never get to that out-of-stock point.

Toshiba has a fully frictionless store experience where, in execution, retailers know exactly what’s on their shelves in real time, and customers can shop with no checkout process. Fredrik Carlegren, executive director of global marketing for Durham, N.C.-based Toshiba Global Commerce Solutions, is quick to note, however, that the greatest excitement of these technologies is how they can be implemented into existing stores today.

“Inventory control and loss prevention are the two big things immediately,” Carlegren says, “and you don’t have to change consumer shopper behavior.”

Multilayered shelf sensors, or “smart pads,” can determine the weight, pressure and shape of items, while edge-computing computer vision cameras combine to create an effective solution for knowing what’s out of stock or where in the store something is if it’s been misplaced.

Implementing pieces of technology that are most valuable to the retailer isn’t just about the capabilities of the tech itself. Without managers and employees interacting with robots, computer vision, software and more, inventory optimization is a moot point.

Wade speaks of reallocating human capital to other areas of the store and higher-value activities that improve the overall shopping experience.

Itasca Retail taps into a similar sentiment — what it calls “the human side of CGO.” With highly refined CGO, employees can greatly cut down on the amount of time they spend counting items and stocking shelves and displays throughout the day.

Empowering employees and increasing the bottom line are really what inventory optimization boils down to, but don’t forget the most important part: improving the customer experience.