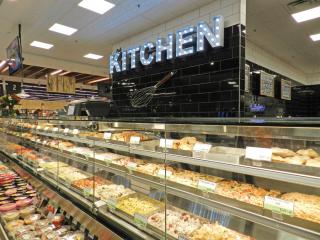 Like many other independents, Busch’s Fresh Food Market, operating 17 stores in southeastern Michigan, works to create stores that draw consumers’ attention. To do that, the Busch family opened J.B.’s Smokehouse in its new Canton store. The barbecue restaurant can be accessed through the supermarket or its own separate entrance, but the door from the store is situated within the deli/prepared food area with gelato and juice bars as well as a Starbucks, creating a bit of a food court feel, according to John Busch, chairman.

“We try to be fairly synergistic with the store,” he adds.

A barbecue-style restaurant fits well with the other offerings in the store’s prepared food department. Both the store and restaurant order from the same suppliers; they place separate orders, but the products used in the restaurant’s menu can typically be purchased in the store, including the beer selection. Even the barbecue sauce developed for the restaurant is bottled and sold on the store shelves.

Some of the restaurant’s offerings are prepared in the meat department’s smoker used for briskets, pork shoulders and other products that require a long cooking cycle. Shorter-cooking items, like chicken and ribs, are prepared in the two wood smokers at the front of the store.

The store and the restaurant also use some of the same prepared foods.

Customers also can purchase wine in the store and drink it in the restaurant for a $5 corkage fee.

“It’s an evolving concept for us,” he notes, “but both feed off each other. Sometimes, they’re here for different purposes and different meals.”

Customers can eat in the in-house restaurant or come in and get a meal for carry-out. JB Smokehouse also offers online ordering for quick pickup. “If you need to grab some detergent and a gallon of milk while you’re at it,” Busch adds, “it’s easy to do.”