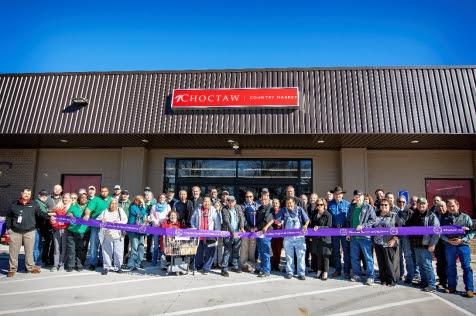 The Choctaw Nation of Oklahoma has opened a second Choctaw Country Market, in Boswell, Okla. The remodeled 9,000-square-foot store created 28 jobs in the area.

“It’s a part of this Tribal Council to keep our communities alive,” said Chief Gary Batton. “We have people driving upwards to 30 miles to get groceries, and I’m thankful for everyone investing in Boswell to rise our tide for the greater good of all our tribal people.”

The location also features an on-site butcher, fresh produce and a Chahta Grill, as well as two fuel pumps, which will open next month. The grand opening, which took place March 14, included a giveaway of two $100 gift certificates to the store.

“We’re so glad to finally get this store here in Boswell,” said Perry Thompson, Choctaw Nation Councilmember District 8. “The main thing is we’re giving people jobs and a place to shop.”

The Choctaw Country Market opened in Clayton, Okla., in 2016.

The Choctaw Nation is the third-largest Indian Nation in the United States, with close to 200,000 tribal members and 9,000 employees. The Division of Commerce manages an array of businesses, including 20 gaming sites, three resorts, six hotels, a KOA RV park, six restaurant franchises, a country market, a printing company, 17 travel plazas, and 12 ranches and farms encompassing 65,000 acres where they manage 3,000 cattle and harvest 130,000 pounds of pecans.