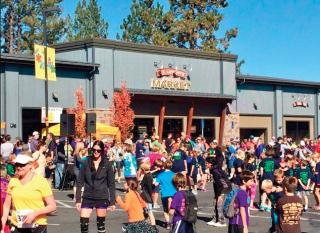 To succeed in center store, grocers have to think outside the box. C.E. Lovejoy’s Brookswood Market, in Bend, Ore., also has begun thinking outside the keg.

“We’ve definitely had our battles, but we’ve found the best thing we can do is keep a good variety of what’s hot on tap, and at the same time keeping our fingers on the pulse of our own neighborhood,” says Chris Whaley, store manager.

The growler station at C.E. Lovejoy’s — amusingly dubbed Love Handles — keeps on tap 11 beers and one kombucha that are regularly rotated. The store receives five to six kegs a week to keep up with demand, so varieties can change quickly.

“We’re changing half our taps every week to new beers,” Whaley notes. “We have a nice fluctuation of beer in there all the time, and every three months, a new seasonal will come out, so we’ll have that on tap.”

Love Handles’ varieties are posted on the store’s website so customers can easily see what’s on offer. C.E. Lovejoy’s also recently changed its liquor license to sell beer by the pint, so customers can now buy a pint to drink as they shop or try a small sample before they invest in the larger growler. The varieties also tend to be hyper-local. Of the 11 beers available when PG spoke with Whaley, five were from Bend, two were from towns around Bend, two were from elsewhere in Oregon, and the other two were from the West Coast, one from Washington state and the other from California. The kombucha also was from Bend.

Whaley credits the “beer connoisseurs” on staff with staying on top of what customers want. With its location away from downtown Bend, C.E. Lovejoy’s is truly a neighborhood market and has to meet the needs of that neighborhood. Part of that means hosting twice-monthly beer gardens during the summer that also feature live music and food like sausages made in-house in the store’s meat department.

“That’s a great way for people to come down and try a beer,” Whaley says. “To get it on their mind and get them thinking about what they want and what they like.”