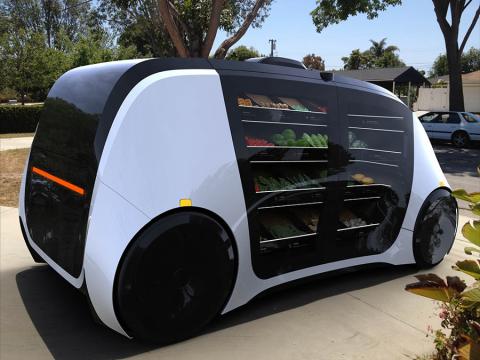 One of the biggest frustrations that consumers have with grocery delivery is their inability to determine the freshness of perishables before they buy. A San Francisco Bay Area startup plans to change this dilemma by “taking it to the streets” – literally.

Santa Clara, Calif.-based Robomart, said to be the world’s first self-driving store, made its debut Jan. 9 at the Consumer Technology Association’s CES show, and addresses the fact that nearly nine in 10 consumers age 26 to 44 don't purchase fresh produce online because they feel home delivery is too expensive and they want to purchase their own produce, according to Robomart research. The electric vehicle is refrigerated and sports stadium-style shelves, keeping perishables cool and giving consumers a good look at them.

To shop their “store,” consumers can tap a button to request the closest Robomart vehicle. Upon its arrival, its doors unlock and shoppers can take the products they want before closing the doors and sending the vehicle on its way. Via proprietary grab-and-go technology, the vehicle detects what products are taken, charges for them and sends a receipt.

The Level 5 autonomous car – which means it is completely driverless and can operate on any road and in any conditions a human driver could negotiate – is outfitted with lidar, sensors, radar and cameras, and leverages Nvidia’s Drive platform, which is said to be the world’s most advanced self-driving-car platform, combining deep learning, sensor fusion and surround vision to change the driving experience. It can understand in real time what's happening around the vehicle, precisely locate itself on an HD map, and plan a safe path forward.

Such technology can make the so-called "last mile" far more affordable – and attractive – to consumers and retailers alike. The self-driving store can provide on-demand grocery delivery that's more than five times cheaper on a per-order basis, and retailers can gather consumer data from the vehicles to obtain detailed insight into sales and consumption patterns, helping them better serve consumers.

Although Robomart is currently in the process of getting its autonomous-vehicle testing permit from the Department of Motor Vehicles in California, the company has completed its first prototype and begun developing fully functional vehicles, which it plans to deploy in commercial pilots soon. Retailers in the Bay Area will soon be able to sponsor pilots and test the vehicles with their customers.