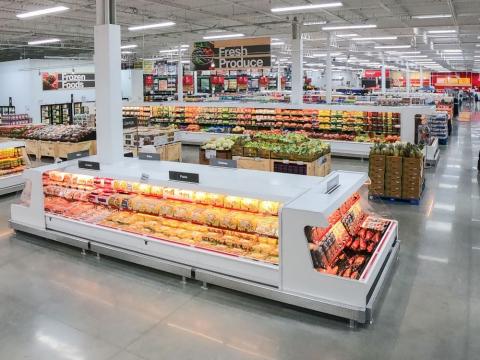 Traditionally known as a leading membership warehouse club in the eastern part of the United States, BJ’s Wholesale Club continues to push westward with an entry into the Pittsburgh area. The new club will open in South Fayette Township, Pa., on Dec. 10.

The company’s first club in the Pittsburgh market will bring the retailer’s total number of U.S. locations to 223, with 18 of those being in the state of Pennsylvania. Another Pittsburgh location “will be opening in the near future” in Ross Township, according to the company’s website.

The competition in the Pittsburgh market is heating up with BJ’s arrival. Costco currently has three clubs in the area, while Sam’s Club has two clubs in Pittsburgh, with an additional five in the surrounding area.

The new BJ's club is located at 4000 Victoria Street in Bridgeville. It will feature a vast selection of fresh food and produce, a full-service deli, household essentials, pet supplies, and various exclusive offerings. The store will also provide an assortment of seasonal items, home décor, fashion for the family, toys, hot tech, and a selection of local products. BJ’s members can choose from shopping options like curbside pickup, pick up in-club, same-day delivery, delivery from BJs.com, and shopping in-club.

“We’re excited to open our very first club in the Pittsburgh market, expanding our footprint in Pennsylvania, and to bring BJ’s outstanding offerings to South Fayette and the surrounding community,” said Malika Harris, club manager of BJ’s Wholesale Club in Bridgeville. “We are excited for our doors to open and serve our members and community, especially during the busy holiday season.”

BJ’s is offering a limited-time Founding Member offer for local shoppers interested in joining the club now through Dec. 9.

The company has plans for a handful of new club openings in January for Port Charlotte, Fla.; Lansing, Mich.; and on New York’s Long Island, with an additional 10 more new clubs on tap for 2022.

Westborough, Mass.-based BJ’s Wholesale Club operates more than 220 clubs and 150-plus BJ’s Gas locations in 17 states. The company is No. 27 on The PG 100, Progressive Grocer’s 2021 list of the top food and consumables retailers in North America. Issaquah, Wash.-based Costco is No. 4 on The PG 100. Sam’s Club, a division of Bentonville, Ark.-based Walmart Inc., ranks ninth, while Walmart U.S. is No. 1 on PG’s list.