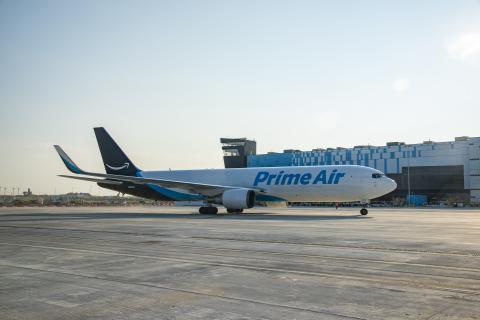 The 800,000-square-foot sortation building sits on an over 600-acre campus that features seven buildings, a new ramp for aircraft parking and a multi-story vehicle parking structure.

Nearly five years after breaking ground, Amazon has finally opened a $1.5 billion air hub in Kentucky that promises to accelerate its efforts to dominate last-mile delivery.

The Amazon Air Hub at the Cincinnati/Northern Kentucky International Airport (CVG) will serve as the central hub for Amazon Air’s U.S. cargo network, facilitating the rapid transport of customer packages across the country.

“Wonderful communities and diverse teams like this are the heart and soul of our operations,” said VP of Amazon Global Air Sarah Rhoads. “We’re excited to get rolling in Northern Kentucky, and we’re thrilled to employ thousands of fantastic people from the area in this next-generation, highly sophisticated facility that will connect our air cargo network for years to come.”

The 800,000-square-foot sortation building sits on an over 600-acre campus that features seven buildings, an expansive new ramp for aircraft parking and a multi-story vehicle parking structure. The sortation facility is equipped with the innovative use of robotics technology that helps move and sort packages — including robotic arms and mobile drive units that transport packages across the building — miles of interlinked conveyors, and ergonomic workstations that support a comfortable work environment for employees. The building will also feature a solar rooftop scheduled for installation over the next year, and all energy generated from the panels will feed directly into the electrical grid of the local community.

“The Amazon Air Hub at the Cincinnati/Northern Kentucky International Airport will make Kentucky the undisputed national leader in air cargo,” said Kentucky Governor Andy Beshear. “In addition to creating thousands of direct and indirect jobs, this hub puts Kentucky at the center of Amazon’s U.S. distribution network. Across the coming years, Amazon Air will help attract more manufacturers, service providers, and tech companies to Kentucky seeking to take similar advantage of our key geographic location. Congratulations and thanks to Amazon for this monumental investment in our state and workforce. We look forward to continuing the commonwealth’s longstanding and successful partnership with Amazon for decades to come.”

Amazon Air has expanded its presence in the United States to more than 40 locations and launched its European air hub in 2020 at Germany’s Leipzig/Halle Airport. Amazon Air has also purchased 6 million gallons of sustainable aviation fuel and invested in leading-edge electric ground service equipment.

In July, Amazon reported a 10% increase in physical store sales for the second quarter as the retail giant also logged its third consecutive $100 billion quarter.

But Amazon’s physical stores, which include its four grocery banners of Whole Foods Market, Amazon Fresh, Amazon Go Grocery and Amazon Go, increased revenue by 10% to $4.2 billion from $3.77 billion a year ago. During the previous quarter, Amazon's physical store sales declined 16%.

“Over the past 18 months, our consumer business has been called on to deliver an unprecedented number of items, including PPE, food, and other products that helped communities around the world cope with the difficult circumstances of the pandemic. At the same time, AWS has helped so many businesses and governments maintain business continuity, and we’ve seen AWS growth reaccelerate as more companies bring forward plans to transform their businesses and move to the cloud,” said Andy Jassy, Amazon CEO. “Thank you to all of our passionate, innovative, mission-driven employees around the world for continuing to stay focused on delivering for customers — I am very excited to work with you as we invent and build for the future.”

For the first time, Amazon brought Just Walk Out technology to a full-sized grocery store in May, offering customers in Bellevue, Wash., the option to skip the checkout line or use traditional checkout. Amazon Fresh now has 15 stores in the United States and five in the United Kingdom.

Amazon's Prime is now available in 22 countries with the addition of Prime in Portugal, which offers members unlimited, free two-day delivery on millions of products, as well as access to Amazon Prime Video streaming.

Business Prime now serves more than 1 million business customers of all sizes worldwide, including Chevron, Citi, and the State of Utah. Since launching in 2017, Business Prime has saved members millions of dollars by shipping over 140 million packages free of charge.

“Customers who tried Key In-Garage Grocery Delivery have loved the service, which is why we’re expanding it to everywhere Amazon offers grocery delivery,” said Pete Gerstberger, head of Key by Amazon. “As customers look for more convenience in their daily lives, we’re excited to deliver another service that not only helps them save time, but provides peace of mind knowing that tonight’s dinner is safe in their garage and out of the weather.”

The garage grocery delivery expansion came just one week after Amazon made another announcement in its quest to reinvent the grocery space and how consumers shop. The company is now allowing grocery shoppers at Whole Foods Market to pay for groceries without cash, credit cards or even a smartphone app.

Amazon announced April 21 that it is launching its Amazon One technology at Whole Foods Market in Seattle, with plans to expand the tech cross the chain. Amazon One allows shoppers to pay using the palm of their hand: their unique palm signature, as Amazon calls it.

"Over the past several years, we’ve focused on innovating on behalf of our customers to make their shopping trips easier and more effortless," said Dilip Kumar, VP, physical retail and technology at Amazon. "We started with Just Walk Out technology in Amazon Go, and we have since brought that experience to new store formats and locations, and made it available as a service to third-party retailers to use in their stores. We built the Amazon Dash Cart, a smart shopping cart that helps customers in our Amazon Fresh grocery stores skip the checkout line and roll out when they’re done. Most recently, we introduced Amazon One, a fast, convenient, contactless way for people to use their palm to enter, identify and pay."

Finally, Amazon continues to expand its air cargo network to meet growing customer demand. In January, the company announced the purchase of 11 aircraft from Delta and WestJet to expand its Amazon Air fleet to more than 85 aircraft by the end of 2022. The company also announced new Amazon Air sites in Toledo, Ohio, and Fairbanks, Alaska, and plans to expand existing operations in Canada this summer.