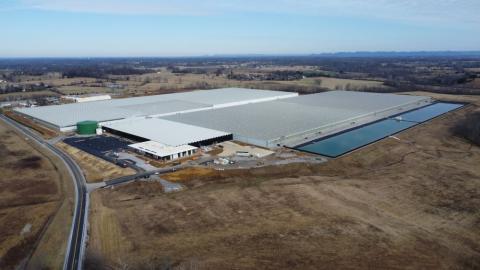 Sustainable food company AppHarvest Inc. has opened a 60-acre high-tech indoor farm in Richmond, Ky., its fourth such facility in the Bluegrass State.

Based in Appalachia, AppHarvest develops and operates some of the world’s largest indoor farms with robotics and artificial intelligence to build a reliable, climate-resilient food system. Its farms are designed to grow produce using sunshine, rainwater and up to 90% less water than open-field growing, all while producing yields up to 30 times that of traditional agriculture and preventing pollution from agricultural runoff. Food retailers have demonstrated increasing interest in high-tech indoor farms for their ability to de-risk fruit and vegetable production with a more climate-resilient, more sustainable year-round growing solution that uses far fewer resources.

AppHarvest’s new Richmond farm has already begun growing Campari brand tomatoes. Half of the Richmond farm currently is planted, and the other half is expected to be planted in 2023. The first harvest is anticipated in early January, which will mean that for the first time, AppHarvest is expected to have commercial shipments coming from each facility in its four-farm network.

In what the Certified B Corp company believes is the largest simultaneous buildout of controlled-environment agriculture infrastructure in U.S. history, AppHarvest has quadrupled the number of farms operating in its network in 2022. The company opened two other high-tech indoor farms — a 30-acre farm in Somerset, Ky., for strawberries and cucumbers and a 15-acre farm in Berea, Ky., for leafy greens. It also produces tomatoes at its 60-acre flagship farm in Morehead, Ky.

AppHarvest is shipping strawberries under the WOW Berries brand and washed-and-ready-to-eat leafy greens under the Queen of Greens brand. In its third growing season, the AppHarvest Morehead farm has further diversified its crop, adding snacking tomatoes sold under the Sunset brand as Flavor Bombs and Sugar Bombs. Morehead began its harvesting this season ahead of schedule.

Meanwhile, AppHarvest has entered into an agreement with Mastronardi Berea LLC, a joint venture between Kingsville, Ontario-based Mastronardi Produce and Zug, Switzerland-based COFRA Holding, for the sale-leaseback of its Berea farm for approximately $127 million with an initial lease rate of 7.5% over 10 years, with four renewal terms of five years each. Mastronardi Produce is AppHarvest’s exclusive marketing and distribution partner, which has sold AppHarvest’s produce into some of the top national grocery store chains, restaurants and foodservice outlets. Some of the proceeds of the sale-leaseback will be used to repay the previously revealed $30 million bridge loan from Mastronardi Produce to AppHarvest and the first two years of prepaid rent at the Berea facility.