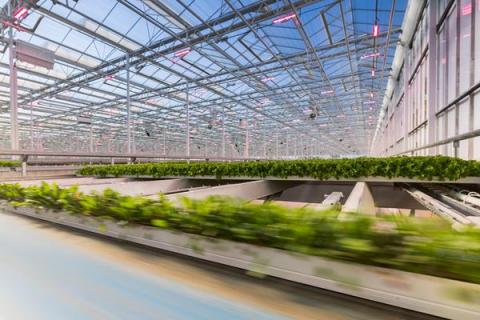 A trough of salad greens moves from the touchless growing system to the autonomous harvesting area of the 15-acre AppHarvest Berea farm.

At 15-acres – or nearly 654,000 square feet – the AppHarvest Berea farm is expected to be the world’s largest high-tech indoor farm for autonomously harvested salad greens. The hands-off system is automated from pre-seeding to packaging, including on-site washing to help improve both food safety and efficiency for the “Queen of Greens” washed and ready-to-eat salad packs. The farm is designed to grow about 35 million lettuce plants at a time, which go from seed to maturity in about three to four weeks, depending on variety.

As traditional lettuce-producing areas in California and Arizona experience ongoing drought, and other severe weather conditions wreak havoc on crop yields, AppHarvest believes that its controlled-environment agriculture (CEA) approach, producing more predictable yields with less water and other resources, will be critical in providing fresh fruits and vegetables that are affordable.

The AppHarvest Berea growing environment leverages sunshine and rainwater and is automated for lighting, humidity and temperature. The farm uses a closed-loop irrigation system, which enables expected water savings of up to 90% compared with open-field farming and allows for precision dosing of nutrients, resulting in far less use of fertilizer compared with open-field farming while avoiding pollution from agricultural runoff. The closed-loop system also aids in integrated pest management — using good bugs to take care of bad bugs and early detection and prevention — to avoid the use of harsh chemical pesticides. The adaptive-spacing design of the troughs in the touchless growing system further minimizes any potential pest exposure.

The CEA facility is opening in a phased approach, beginning with 5 acres, and then bringing on additional productive acreage over time. AppHarvest began first commercial shipments of salad greens earlier this month.

AppHarvest has also revealed a $30 million loan from marketing partner Mastronardi Produce secured by the Berea farm. The company also intends to pursue sale-leaseback financing for the AppHarvest Berea farm.

“AppHarvest is deepening its relationship with Mastronardi Produce under the Queen of Greens packaged salad brand. Securing nondilutive sources of capital to fund our growth has been the team’s priority, and we expect this financing through Mastronardi to improve cash flow as we continue to scale operations,” said Jonathan Webb, founder and CEO of Morehead, Ky.-based AppHarvest. “Working closely with Mastronardi, the AppHarvest team has set new precedents in the CEA sector by quadrupling our number of farms in such a short time. With the Berea opening, we now have two farms shipping produce to national customers, and our 30-acre Somerset berry facility also is expected to ship in the next few weeks. We expect Morehead to start its third harvest and to start planting our 60-acre Richmond tomato farm in November.”

The secured financing is being delivered in two tranches of $15 million each, the first of which occurred on Oct. 25, while the second is anticipated four weeks later. The loan will incur an interest rate of 7.5%, with interest paid in kind until the loan matures.

"Our top customers increasingly request CEA-grown produce for its reliable quantity and consistent quality — especially in terms of flavor, texture, color and shelf life — and its more sustainable growing methods," noted Paul Mastronardi, CEO of Ontario, Canada-based Mastronardi Produce. "This deeper relationship with AppHarvest positions us to grow together efficiently to meet increasing demand by expanding our local footprint and delivering on our long-standing ‘fresh from the farm’ commitment to customers."

Major food retailers are demonstrating an increased interest in high-tech indoor farms for their ability to de-risk fruit and vegetable production with a more climate-resilient, more sustainable year-round growing solution that uses far fewer resources. Europe, a pioneer in the industry, is estimated to have nearly 520,000 acres of CEA production, compared with an estimated 6,000 acres in the United States.