New open roles in Amazon's fulfillment and transportation networks offer an average starting pay of over $17 per hour, plus sign-on bonuses in many locations of up to $1,000.

Amazon is on pace to surpass the 1-million-worker mark this year after announcing that it's looking to hire at least 75,000 employees across its fulfillment and transportation networks in the U.S.

Amazon says the regions with most open positions include California, New Jersey, Pennsylvania, Washington and Michigan. The company employs about 950,000 people in the U.S., most at its hundreds of fulfillment centers.

Amazon recently announced pay increases across its fulfillment and transportation networks, and the new open roles offer an average starting pay of over $17 per hour, plus sign-on bonuses in many locations of up to $1,000.

“We look forward to hiring 75,000 associates across our fulfillment and transportation network,” said Alicia Boler Davis, VP of global customer fulfillment at Amazon. “Working at Amazon also comes with an unwavering commitment to safety, especially as we continue to navigate a global pandemic. In addition to the great pay and robust benefits available to new hires starting on their first day, we’re offering a $100 benefit to new hires who come to Amazon already vaccinated for COVID-19.”

In late March, Amazon began rolling out onsite vaccination events at fulfillment centers in Missouri, Nevada and Kansas. The program has now expanded to more than 250 locations across the U.S. and Canada and offers more than half a million front-line employees, contractors and partners access to the COVID-19 vaccine. In many locations, Amazon has also partnered with local authorities to expand its vaccination program to employees’ families. The onsite vaccine initiative is in addition to Amazon’s in-house COVID-19 testing program, which continues to provide front-line employees with access to voluntary, free testing across more than 800 sites globally.

Last month, Amazon reported that it logged a 44% year-over-year revenue increase and profits more than tripled to $8.1 billion during its first quarter.

Amazon announced on April 21 that it is launching its Amazon One technology at Whole Foods Market in Seattle, with plans to expand the tech cross the chain in the coming months. Amazon One allows shoppers to pay using the palm of their hand: their unique palm signature, as Amazon calls it. 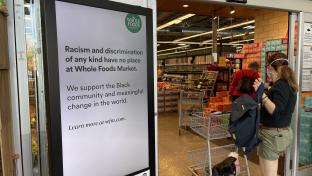 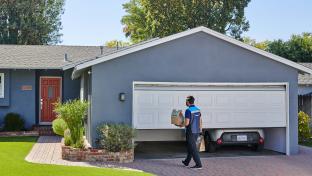