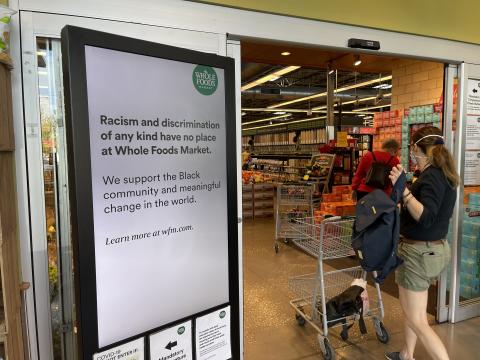 Sales at Amazon's physical stores are down 16% in first quarter.

Robust consumer demand kept Amazon in record-setting territory during the first quarter as the company logged a 44% year-over-year revenue increase and profits more than tripled to $8.1 billion.

“Two of our kids are now 10 and 15 years old — and after years of being nurtured, they’re growing up fast and coming into their own,” said Jeff Bezos in his last earnings report as CEO before he steps down on July 1. “As Prime Video turns 10, over 175 million Prime members have streamed shows and movies in the past year, and streaming hours are up more than 70% year over year. Amazon Studios received a record 12 Academy Award nominations and two wins. Upcoming originals include Tom Clancy’s Without Remorse, The Tomorrow War, The Underground Railroad, and much more. In just 15 years, AWS has become a $54 billion annual sales run rate business competing against the world’s largest technology companies, and its growth is accelerating—up 32% year over year. Companies from Airbnb to McDonald’s to Volkswagen come to AWS because we offer what is by far the broadest set of tools and services available, and we continue to invent relentlessly on their behalf. We love Prime Video and AWS, and we’re proud to have them in the family.”

Earlier this week Edge by Ascential released a survey indicating that Amazon is on track to overtake Walmart as the largest U.S. retailer by 2025. Amazon GMV sales are projected to reach $631.6 billion by 2025 (a compound annual growth rate of 14%), according to Edge by Ascential’s market research arm Retail Insight. Meanwhile, Walmart sales are projected to grow at a CAGR of 3.9% to reach $523.3 billion by 2025.

“As Amazon grows to become the largest retailer in the U.S., brands must understand they cannot win through mass personalization when faced with the huge spending power of large marketplaces like this. They should therefore ensure they have the correct strategies in place to use marketplaces, like Amazon, to reach the right consumers and meet their needs,” said Deren Baker, CEO at Edge by Ascential.

Moreover, Edge by Ascential analysts predict that there will be a more permanent shift to online grocery even after the relaxing of social restrictions and a return to some sort of normality. During the peak pandemic period of 2020, online grocery sales accelerated, up by about 35% in 2020 to reach $30.8 billion. For a fifth of online grocery shoppers in the United States, this was their first time doing their grocery shopping online, accelerating long-term e-commerce adoption trends. The pace of growth for online grocery will level off after the 2020 boom, but grocery e-commerce is still expected to grow at 13.3% CAGR between now and 2025, according to Edge by Ascential analysts.

In the meantime, Amazon has been making changes to its omnichannel grocery ecosystem at a frenetic pace.

“Customers who tried Key In-Garage Grocery Delivery have loved the service, which is why we’re expanding it to everywhere Amazon offers grocery delivery,” said Pete Gerstberger, head of Key by Amazon. “As customers look for more convenience in their daily lives, we’re excited to deliver another service that not only helps them save time, but provides peace of mind knowing that tonight’s dinner is safe in their garage and out of the weather.”

The garage grocery delivery expansion comes just one week after Amazon made another announcement in its quest to reinvent the grocery space and how consumers shop. The company is now allowing grocery shoppers at Whole Foods Market to pay for groceries without cash, credit cards or even a smartphone app.

Amazon announced April 21 that it is launching its Amazon One technology at Whole Foods Market in Seattle, with plans to expand the tech cross the chain in the coming months. Amazon One allows shoppers to pay using the palm of their hand: their unique palm signature, as Amazon calls it.

"Over the past several years, we’ve focused on innovating on behalf of our customers to make their shopping trips easier and more effortless," said Dilip Kumar, VP, physical retail and technology at Amazon. "We started with Just Walk Out technology in Amazon Go, and we have since brought that experience to new store formats and locations, and made it available as a service to third-party retailers to use in their stores. We built the Amazon Dash Cart, a smart shopping cart that helps customers in our Amazon Fresh grocery stores skip the checkout line and roll out when they’re done. Most recently, we introduced Amazon One, a fast, convenient, contactless way for people to use their palm to enter, identify and pay."