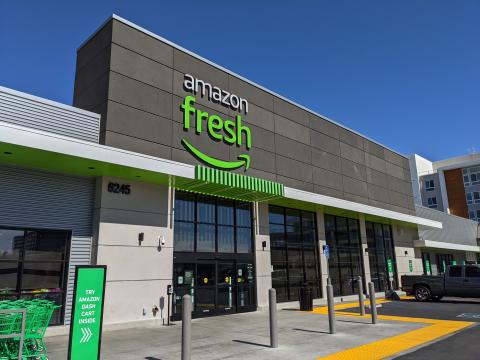 Amazon Fresh is no longer set to expand in the U.K., according to newspaper reports.

Amazon has halted an expansion of its checkout-free Fresh concept across the pond, according to reports. The retailer first entered the U.K. in early 2021 and had plans to open hundreds of Fresh outposts there, but negotiations on new locations have ceased and the search for more locations has ended, The Sunday Times reports.

The Times also reported that some store openings will go on as planned if leases have already been signed on the properties, with a spokesperson telling the newspaper: "We look forward to opening additional Amazon Fresh stores in the near future." The newspaper’s report points to lower-than-expected sales at existing Fresh stores in the U.K. and the high cost of building new tech-enabled locations as reasons for the move.

In an interview with Progressive Grocer last month, NCR’s retail chief David Wilkinson explained that an Amazon Fresh store he visited in London, as well as other cashier-less concept stores from Sainsbury’s and Morrisons, had very few customers in them.

“I’m not sure how viable they are in their current form,” Wilkinson explained. “At NCR, we’re trying to achieve balance and inclusiveness in the checkout experience. Just putting a barrier to make checkout life easier is not the way most consumers want to interact.

In the U.S., meanwhile, several new Amazon Fresh stores with Just Walk Out shopping have opened this summer. A trio of Fresh locations opened in the Northern Virginia region and a fourth was brought to the Chicago suburb of North Riverside. Other Fresh outposts in Paramus, N.J., and Oceanside, N.Y., have been added to Amazon’s roster over the past couple months.