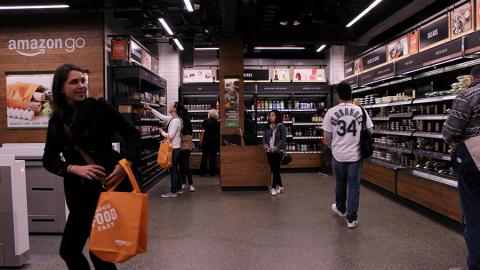 A new poll finds that Amazon is the top food retailer when it comes to company reputation.

Amazon, Publix, Wegmans, Costco and the The Kroger Co. made the Top 10 list of a new ranking of companies that have earned solid reputations during the pandemic.

The Axios Harris Poll 100 list is an annual reputational ranking of businesses, including retailers, suppliers and brands.

“Now more than ever, companies that performed well on traditional reputation measures and responded to our global health crisis have the best reputations," says John Gerzema, CEO of The Harris Poll. "Americans say large companies – with resources, infrastructure and advanced logistics – came to America's rescue during the pandemic. In fact, today, big business is seen as more reliable than the federal government in keeping America running."

The Axios Harris Poll 100 has ranked business reputation since 1999. The survey's Reputation Quotient (RQ) ranking is based on company performance in seven key areas:

Amazon took the No. 3 spot in this year’s survey, the highest ranking for a food retailer. Publix was No. 4, Wegmans was No. 6, Costco was No. 7 and Kroger was No. 9.

"What real people think about your company has never mattered more than it does today. Your brand perception can impact everything from recruitment and retention to sales and ultimately, the bottom line," says Axios CEO and Co-founder Jim VandeHei. "As the multiple crises plaguing America rage on, the Axios Harris Poll 100 is a clear benchmark of who is winning and losing in the public eye."