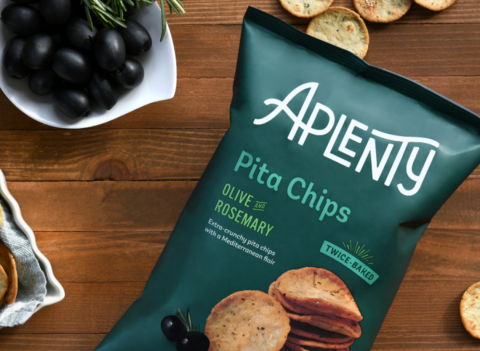 When shoppers begin streaming into Amazon Fresh grocery stores across the country, Amazon wants to make sure the center store is full of delicious private label products.

That's why the company has launched yet another private brand — this one is called Aplenty — featuring products across categories such as confections, salty snacks, cookies/crackers, frozen foods, condiments and sauces, seasonings, baking mixes and pantry staples. Aplenty products are already available on Amazon.com, but will be phased into Amazon Fresh stores this year.

"Each product is developed to the highest standards with recipes rooted in quality ingredients to deliver great taste without artificial flavors, synthetic colors, or high fructose corn syrup. To guarantee quality, every product is rigorously taste-tested to exceed our customers’ expectations, and we stand by this promise with our Delicious Guarantee: if you don’t love it, we’ll refund you the purchase price," according to a company statement.

Aplenty joins Fresh, Cursive and a slew of other grocery private brands that Amazon has launched over the past year. The brands will play a starring role in the retailer's Fresh grocery stores, now expanding across the United States and hitting the East Coast this year.

The Aplenty announcement comes after Target said in March it was debuting Favorite Day, a new owned food and beverage brand with a 700-SKU assortment of sweet and savory products spanning categories such as bakery, trail mix, ice cream, snacks and more, all priced below $15.

In a March investor meeting, Kroger said it is intent on growing its private label business, which already consists of 15,000 items that generated sales last year of $26.2 billion. One of its newer brands, Simple Truth, launched only five years ago, recently surpassed $3 billion in annual sales. The company’s next billion-dollar brand, according to Stuart Aitken, Kroger’s chief merchandising and marketing officer, will be Home Chef. Acquired in June 2018 for $197 million, the meal solutions brand saw a sales increase last year of 118%, according to Kroger.

Private brands were hot before the pandemic, but the crisis, its resulting recession and out of stocks at the shelf drove consumers to lift private label sales even further in 2020.

In January, IRI found that small and extra-small CPG manufacturers’ and retailers’ own brands gained U.S. market share over larger players during 2020. Of the CPG industry’s $933 billion of total U.S. sales in measured channels in 2020, large manufacturers collectively lost 1.3 share points, or $12.1 billion in sales, to smaller players due to channel shifts, supply constraints and category shifts.

“The consumer shift toward smaller manufacturers and private label products is something that IRI has been documenting for several years, and we saw the trend accelerate during the COVID-19 pandemic,” explained Dr. Krishnakumar (KK) S. Davey, president of Strategic Analytics for IRI. “Many large manufacturers were not able to meet the surge in demand caused by the COVID-19 pandemic in the second quarter when they lost most share to smaller players who seized on this opportunity. Several brands attracted a number of new buyers as in-home consumption surged. Large manufacturers fared relatively better in the third quarter, but still lost significant share (-1.3 points vs. year ago as compared vs. -1.9 share points vs. year ago in the second quarter). The fourth quarter saw some improvement and reversion to historical trends (-0.8 points vs. year ago). Many extra-small manufacturers are mostly new entrants to the market into supply-constrained categories (e.g., soap, hand sanitizers, home health care kits).”

Seattle-based Amazon is No. 2 on Progressive Grocer’s 2020 PG 100 list of the top grocers in the United States, while Austin, Texas-based Whole Foods Market, which it owns, is No. 24. Target Corp. is No. 7 and Kroger is No. 3.