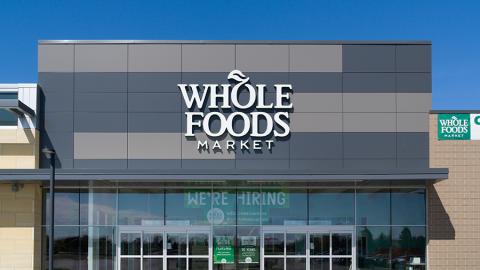 Grocery delivery services keep growing and changing, and the latest example of that comes from Amazon.

The company reportedly is testing a concept that would have independent contractors that are part of its Flex driver program pick products from shelves at Whole Foods Market stores, and then deliver them in their own vehicles. “The move may reduce the online retail giant’s reliance on employees who are eligible for medical insurance, sick pay and other benefits,” Bloomberg reported. Amazon offered no immediate comment.

The savings could come from having the Flex drivers gather orders from grocery store shelves. “These people currently drive groceries to customers’ homes, while the products are gathered and bagged in stores by Amazon employees earning at least $15 an hour. The test will require Flex drivers to do the picking and packing, too,” according to Bloomberg, citing “correspondence” it reviewed as its source.

The potential move comes as the nature of the gig economy continues to be debated, especially in California, as gig workers push for more benefits, and companies that depend on gig labor defend their business models. Meanwhile, delivery services for groceries and other types of food continue to gain popularity during the pandemic. For example, Postmates, about to be bought by Uber, recently said that it has become the official on-demand food delivery partner of the National Football League.

Earlier in September, it opened its second Amazon Go Grocery cashier-free store, this one in Redmond, Washington — a town probably best known as the home of Microsoft. An Amazon spokesperson told Progressive Grocer that the store is about 13,000 square feet overall, with 7,350 square feet of selling area. The new store is located in the Overlake Fashion Plaza in Redmond and is open from 7 a.m. to 10 p.m. daily.

The newest edition of Amazon Go Grocery opens its doors as the company also pursues other paths in food retail innovation. For instance, news recently emerged that Amazon will put a grocery operation inside a Kohl’s store — expanding on a relationship between the two retailers that had focused on returns of Amazon items.

The Fresh banner isn't an offshoot of Whole Foods, nor does it look like a checkout-less Amazon Go store. The new Amazon Fresh supermarket takes elements of all of those concepts — micro fulfillment, contactless features, a curated assortment of premium and conventional products, and highly personalized service -- and melds them into one innovative store that offers something for every type of food shopper, from low-touch cashierless checkout to high-touch made-to-order prepared foods.

Seattle-based Amazon is No. 2 on The PG 100, Progressive Grocer’s 2020 list of the top food and consumables retailers in North America, while Austin, Texas-based Whole Foods is No. 24 on PG's list.