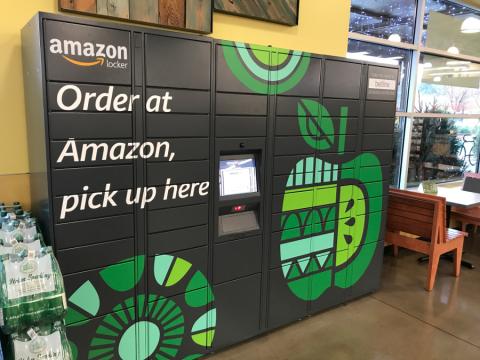 Since Amazon took control of Whole Foods in late August 2017, micro-visits to stores with Amazon Lockers have risen 11 percent versus a 7 percent increase at stores without lockers

Average monthly foot traffic in Whole Foods Market stores has seen a bump since news of their acquisition by Amazon broke last June, but the addition of Amazon Lockers, which allow for pickup of mail-ordered packages from the Seattle-based ecommerce giant, has upped brief visits to the natural retailer’s stores even more, new research from Venice Beach, Calif.-based digital marketing agency InMarket finds.

“Micro-visits,” defined as three- to five-minute trips to a store – which make up approximately 9 percent of all grocery store visits thus far in 2018 – have grown 9 percent at Whole Foods stores with Amazon Lockers compared with the same period in 2017. And since Amazon took control of Whole Foods in late August 2017, micro-visits to stores with Amazon Lockers have risen 11 percent versus a 7 percent increase at stores without lockers.

This is significant because the Austin, Texas-based grocer's average stores typically attract fewer micro-visits than other grocers, with only 6.5 percent of trips to those locations lasting between three to five minutes so far in 2018.

“Incremental visits drive additional revenue for retailers, but micro-visits are unique in that consumers could simply be visiting for in-store pickup,” InMarket noted. “Much like a convenience store in dealing with gas customers, it’s up to Whole Foods to capitalize on the short visitation via impulse buys and low-consideration products.”

Mobile devices are critical in this situation, as they offer retailers and brands the opportunity to engage with shoppers during the exact window of time that they’re inside a store. As the relationship between Amazon and Whole Foods evolves, it wouldn’t be surprising to see Amazon surround its in-store lockers with convenience-minded products to drive incremental sales on short visits.

“Lockers have been installed at 7-Eleven for roughly three years, which could set an interesting example for the retailer,” InMarket said. “And if seamless checkout – currently being tested at Amazon Go stores – goes mainstream, this could become a very interesting case example of grocery evolution and convergence.”

Amazon Lockers are secure, self-service kiosks where customers can pick up packages from Amazon.com at a time and place that is convenient for them. Customers choose a locker and add it to their Amazon address book as a destination. During checkout, they select the locker as their shipping address, receiving a unique six-digit code via e-mail upon the packages delivery. Customers collect their package by entering the code into the locker's touchscreen.

As of December 2017, Amazon had 2,000-plus lockers located across more than 50 major metropolitan areas nationwide. At that same time, nearly 400 Whole Foods stores were homes to Amazon Lockers.