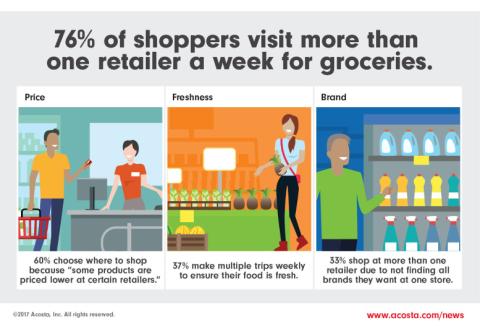 While many grocers hope their shoppers are loyalists who rarely stray, new research shows that three out of four consumers visit more than one retailer each week for their grocery needs.

Some 76 percent of Americans shop more than one grocer per week, with 67 percent of them frequenting two to three retailers during the period, according to “Trip Drivers: Top Influencers Driving Shopper Traffic,” a new report from Acosta, a CPG-focused sales and marketing agency based in Jacksonville, Fla.

"Shoppers appreciate having options, which is why we are seeing a rise in hopping from store to store for weekly grocery trips," said Colin Stewart, SVP at Acosta. "People are motivated by not only good deals and fresh products, but also by brand loyalty, which can impact their decisions to either keep returning to a particular store, or hopping to another."

Among the drivers of this activity is price: Even when multiple retailers carry the same products, six in 10 shoppers will leave one store for another because “some products are priced lower at certain retailers.” However, only 45 percent of Millennials cite this as a key driver, showing them to be more prone than the average shopper to vary their shopping based on where they are and specific brands.

Grocers seeking to keep shoppers at their specific stores may do well to focus on their private label programs: While only 34 percent of shoppers in 2011 chose which store to shop based on their preference for its own brands, 53 percent do the same today.

"Personalization is a key strategy in connecting with shoppers and creating not only brand loyalty, but also store loyalty," Stewart noted. "No retailer can be everything to everyone, but by knowing what motivates your shoppers, whether it be price, fresh foods or brands, make a commitment to the satisfaction of your shoppers to keep your location in their shopping mix."