In deli there is strength, sayeth retailers.

Deli department sales are robust and expected to continue on this trajectory, according to the grocers responding to Progressive Grocer’s exclusive Retail Deli Review survey.

Nearly three-quarters of the survey respondents said that their deli sales rose in 2018 compared with 2017, and an even greater number — more than 80 percent — said that they anticipate additional growth during 2019. 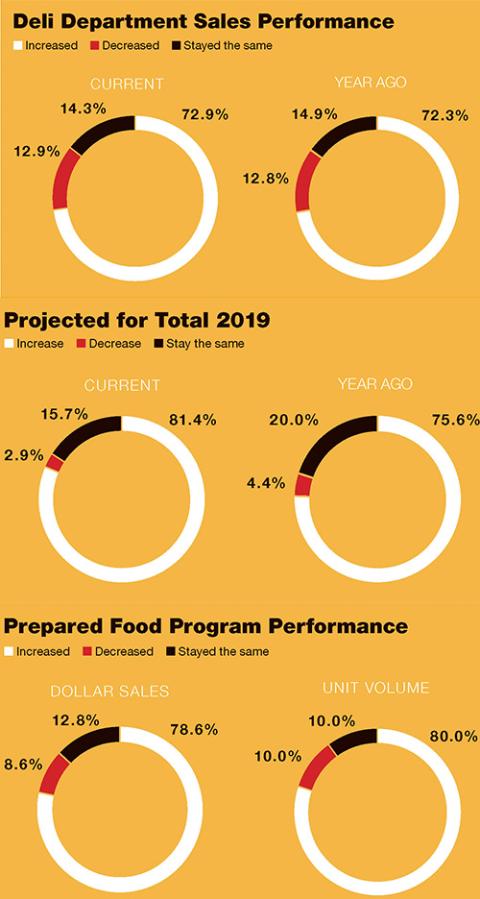 Deli is flourishing at Oleson’s Food Stores’ four locations in and around Traverse City, Mich., for three reasons, according to Samantha Oleson, assistant director of bakery and deli: “The economy, which has an effect not only at a store level, but a community level, due to tourism; our assortment of products to meet our customers’ needs; and our customer service to continue serving our loyal customers.”

Oleson expects that success to continue. “The industry as a whole is able to keep up on up-and-coming food trends, health concerns, and ideas, and I think that will play a big role in the coming years,” she says. “The industry is always changing and growing; there are always opportunities.”

The need for convenient meal solutions is a key consumer motivator, and that’s being reflected in the supermarket deli.

Voni Woods, VP of foodservice, Starbucks and sushi at Pittsburgh-based supermarket chain Giant Eagle, says that growth in the deli is all about convenience, or, as she puts it, “deli in a hurry” — ready-to-heat meals, meal kits, and grab-and-go sandwiches, salads and soups.

To be sure, the top areas that survey respondents said they’ll be concentrating on in deli/prepared foods during 2019 are sandwiches and bundled meals.

Further, nearly two-thirds said that they’re cross-merchandising their deli offerings to drive sales throughout the store.

“Since foodservice is highly perishable, we are mostly not cross-merchandising out of department, but rather bringing items into the area for a more solution-based approach,” Woods notes. “Cornbread by the chili, snacks by the in-department register, all kinds of kid and adult beverages, bread, crackers for cheese and soup, all the toppings for a great salad bar, desserts for one — and more when appropriate, like pumpkin pie with dinners, etc.”

Hot foods and ready-to-eat items are driving growth for Quincy, Ill.-based grocery chain Niemann Foods Inc. “These are home-cooked items made from recipes in store and taken home and warmed up by the customer,” explains Jim Brown, manager of Niemann’s store in Pittsfield, Ill.

Brown notes that he expects deli sales to continue on their current trend of outpacing his overall store sales by about 3 percent.

“Grocery is, of course, the easiest to cross-merchandise with deli items,” Brown acknowledges, adding that bakery items lend themselves well to pairings with deli meat and cheese.

“As the make-at-home items still seem to be going well, I can see our deli getting in this game,” he says. “Take home, mix together and cook for a small amount of time. This would make the customer feel they made the dish.

“Deli is a fun department, and it always seems to have a lot going on,” Brown continues. “Warm foods and take-home-to-go seem to be doing well in our area.”

For her part, Oleson says: “We love the opportunity to cross-merchandise. We see opportunities between all of the departments. Our bakery and deli go hand-in-hand, and we have many grocery items that fit in that mix as well. It is all about thinking about the recipes you make yourself, and if it works together, it is often shown together.”

In PG’s Annual Report of the Grocery Industry in April 2019, retail grocery executives told us that the top issue keeping them up at night is recruiting, training and retaining talent.

The folks running their delis agree — nearly 60 percent of respondents to PG’s deli survey said that “engaged associates” is the most important factor in securing everyday department sales. Additionally, labor was — by far — the leading operational issue named by deli operators, and staff training tied for second place among areas most targeted for investment this year.

“I can’t stress enough the imperative of the team member and guest experience,” Woods asserts. “Simply taking care of team members and guests by providing what they want, when they want it, and at a value they are willing to shop you for, is point of entry. Delivering a personal experience that includes surprise and delight, ‘worth it’ opportunities, personalized offers and simply being obsessive. Making every decision on layouts, offerings, concepts, merchandising and training is all in the best interest of our team members and guests.”

Progressive Grocer’s Retail Deli Review is based on an online survey of retail grocery leaders in March and April 2019. There were 70 respondents in all, encompassing store owners, CEOs, presidents, deli executives and other supermarket deli department decision-makers. Of the respondents, about 55 percent were from grocery operations with 10 or fewer stores, with about 45 percent from chains of greater than 10 stores.

Fittingly, “merchandising/experience” tied for second, with signature items, as the most important factor in deli sales.

Oleson expects a transformation in the coming years. “I believe the idea of a deli will change a lot over the next decade,” she says. “The concept of a traditional deli is becoming intertwined with other departments, and I only see that growing. I think it is best to keep an open mind and be prepared to jump on any opportunity. Our customers want different things then they did in the past, and it is our duty to follow their lead.”

She continues: “As we see a shift in the generations, we will see a shift in our shopping habits and, in turn, how we need to serve those customers. The mix of Baby Boomers, Millennials and Gen Z will make for an interesting time for merchandisers as they attempt to please all generations.”

“There are opportunities for late adopters,” Woods concludes, “by promoting local, transparency, convenience, solutions, health — both for a lifestyle-of-want and a lifestyle-of-need opportunity — and doing grab-and-go right.”