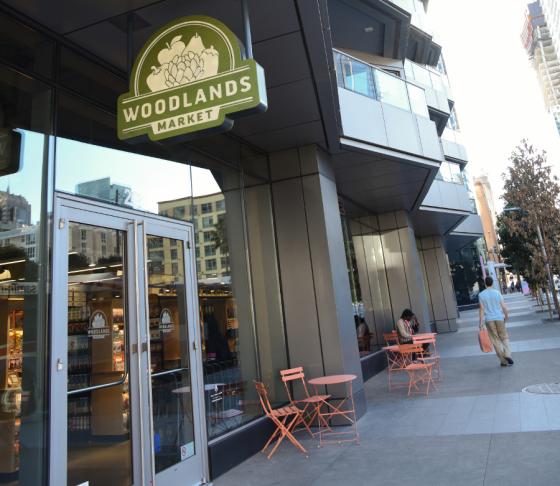 Neighborhoods are continually changing along with their retail landscapes. Striking when the time is right is often the key to success in an urban environment.

That being the case, Woodlands Market has gotten in on the ground floor — literally — in San Francisco’s now booming Rincon Hill neighborhood, near the Transbay Terminal hub. The area was decimated in the 1989 earthquake, and with the rerouting of the highway’s on- and off-ramps, the neighborhood is slowly coming back to life. Both residential and retail buildings are emerging from what was once a sea of vacant lots. One of the first retail spots to open, Woodlands Market, which debuted in August 2017, is located on the ground floor of the Lumina building, which features 650 condos.

“We’re practically ground zero in that we are the hub for the community for all their grocery needs and all their community interaction, because there really isn’t too much else [retail-wise] around the area right now,” says Don Santa, founder and CEO of Kentfield, Calif.-based Woodlands Market. “But it is developing as we speak.”

He notes that in the two blocks immediately around the store, five buildings that are at least 40 stories tall are currently under construction, most of them residential. The plan for the area is to create a neighborhood that’s easily walkable, with all of the necessities.

“We were the first to the party, but there are going to be other offerings and establishments to come,” Santa acknowledges. “But we will be the full-service grocery provider.” 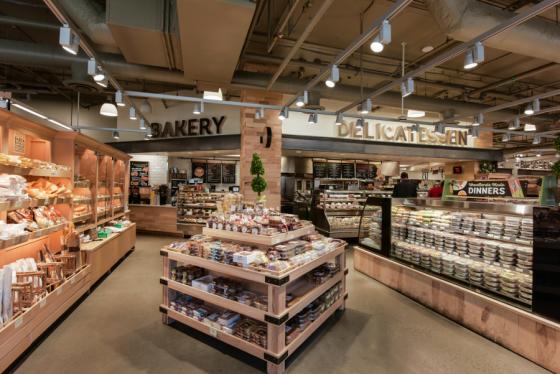 A concrete floor and steel design elements create the urban feel of Woodlands San Francisco, while wood accents retain the warm feeling for which the company is known

As well as being its first urban store, this is the third location overall for the independently owned grocer, whose first two stores are in Kentfield and Tiburon, Calif. While the San Francisco store is much smaller than the two Marin County stores — at about 9,500 square feet — all three independent grocery stores serve a similar economic demographic, although there are some differences when it comes to family size and age. The San Francisco location is home to many who work in the tech industry and live at a bit of a faster pace, with limited time for food shopping or preparation. The Rincon Hill area also seems to be something of a dog mecca.

Accordingly, while Kentfield also is home to Woodlands Café, San Francisco has Woodlands Pet Shop, which is opening this summer next door to the market on the ground level of the Lumina building. The business operates completely separately, but “it’s about feeding the people and feeding the pets,” Santa says.

For Woodlands’ third location, Santa was approached by the developers of Lumina, one of whom is a regular customer at one of the Marin County stores, to open a supermarket in the new residential building.

“It was a step into a whole new marketplace,” Santa admits. “We went from the suburbs into the urban, so [the store] had to have an urban flair and flavor. I think we pulled that off while not losing the warmth and the charm that Woodlands has been known for.”

While Santa and his team were involved from the beginning in the store’s buildout, the design was not without its issues.

“We just had a raw shell; it was a blank canvas,” he notes. “That’s the good news. The bad news was it was kind of a funky layout.”

At a Glance: Woodlands Market

Store designers had to contend with 12 concrete pillars running through the space that hold up the building. Most of the store is located under the eight-story wing of the complex, but a portion is part of the 42-story wing. The other challenge was that the space is long and fairly narrow.

The store is located slightly below street level, necessitating a ramp for accessibility, which eats up fair amount of space. Additionally, the whole side of the store that fronts the street is all windows, which allows in a lot of natural light, but also limits what can be merchandised along that wall.

Some of the pillars could be incorporated into the design of the departments to become less visible, while those that had to remain exposed were wrapped in wood to help soften all of the exposed steel and duct work of the industrial-looking space. The long footprint lent itself to lots of showcases displaying the store’s prepared and fresh food departments. The location dedicates most of its retail space to perishables. (All storage and refrigeration/freezer equipment is housed downstairs.)

The overall aesthetic that Santa wanted to create was rooted in a subtle, pleasant shopping experience, and he paid close attention to the effects of the lighting on the textures that he chose to use, which include wood to soften the stainless steel, and tile on the walls in the prepared foods department. He also opted to forgo the wood floor that his two Marin County stores have in favor of a concrete floor in San Francisco for a more urban feel. The steel I-beams were kept exposed not only to add to the industrial, urban feel, but also to create a feeling of volume and height.

Santa consciously devoted less space to center store than to perishables because he anticipated that in the urban location, the “driver is definitely the prepared foods side and fresh produce.” A lot of the San Francisco customers don’t cook much, so the store offers a variety of house-made entrées to go, including pasta, salads, sushi, poké, sandwiches and soups.

“We do everything from organic chicken to Mexican poké to sushi. Sushi has always been a strong category, and these guys do a really great job. But it’s been a better-than-expected representation of our sales as a percentage as it compares to our other stores,” Santa notes. “Soon we’ll have a ramen bar.” 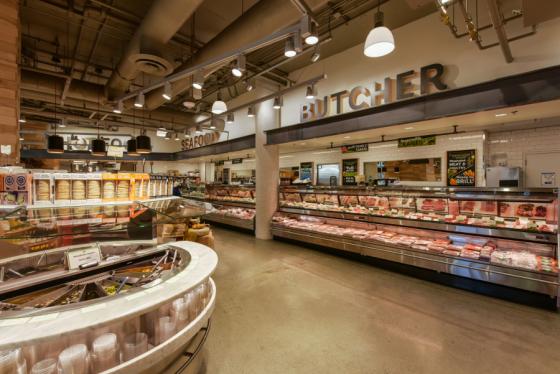 The olive bar is a prime element in all Woodlands locations; the San Francisco store's version features a more urban feel, with steel and marble elements

The store also boasts a salad bar, a hot bar and an olive bar. The first two are set up for all three dayparts: breakfast, lunch and dinner. Due to the urban location, the hot bar in San Francisco has really taken off, and the options and times that it’s stocked have expanded compared with the other two locations. In fact, an expanded hot bar is now in the remodeling plans for the flagship Kentfield store.

Most of the prepared food department’s menu items are tried-and-true Woodlands Market favorites, but a variety of items rotate in and out on a monthly basis to keep the selection fresh. An off-site kitchen serves all three Woodlands locations, but leaves the more theatrical aspects of the final prep to the store-level staff.

“I think it was an important piece for us to become what we are,” Santa observes. “While we still bake and do some cooking on-site, we do all of the takeout, packaged stuff off-site.”

About half of the company’s 350 total employees are in prepared foods.

“It’s what defines us,” he adds. “It’s what has been so successful for us in terms of what customer demands are. I mean, sometimes I feel like we’re selling time as much as we’re selling food. People have so much going on, they don’t have enough time to do it themselves, so they’re willing to pony up and have someone else do it for them … assuming they do it well. So that’s our job.”

While Woodlands may be among small independent grocers, it still offers a selection of private label items, including olive oils, salad dressings, wines, bottled water and even skin care. The move into private label was precipitated by the relationships that Santa developed with manufacturers willing to work with the company’s recipes/formulas.

“It’s been a great piece of what we do,” he notes. “It makes you a player and gives you a stake in the game, because the demands are such that we’re all jockeying for the same attention, the same dollar. What’s going to set you apart? What’s going to make you unique? We’ve been doing it on some level or another as long as I can remember.” 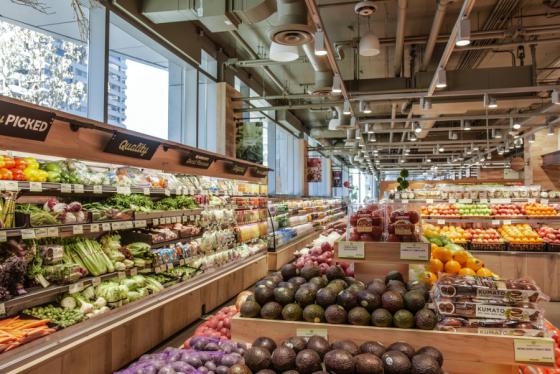 Scale can be issue for independents when it comes to private label products, but Santa credits the company’s location in the culinarily rich Bay Area. “There are so many artisans out there that are super-great and relatively small; those are the guys we want to bring up,” Santa enthuses. “That’s kind of what we’re known for; we’re sort of a springboard for them.”

He then rattles off a list of small manufacturers that identify Woodlands Market as their first retail store, which is something he takes great pride in: providing that impetus to other local businesses to allow them to grow and flourish.

Tucked away in the back of the store is the alcohol department, which provides a higher percentage of sales in San Francisco than it does in the Marin County stores. However, security is a bigger issue, with many of the higher-end offerings merchandised in locked cabinets. Craft beer also is a bigger seller in the San Francisco location.

“This has been a big category for us,” Santa notes. “I think there’s a more discrete palate for your micros.”

Sales have done so well, in fact, that craft beers have crept into space that had originally been designated for dairy.

“The alcohol took off a little bit more than the dairy, but dairy is more suburban-friendly,” he jokes.

With the store’s close proximity to California wine country, Santa also plans to add a full wine bar to the store to replace the temporary station that’s currently in place.

Due to the limited amount of space, the store’s bakery department is supplied by the commissary — the two Marin County stores still do a lot of baking in-house. The San Francisco store’s selection is made up of largely single-serve or smaller-portion options, and the total product line is about half of what’s offered at the suburban locations. 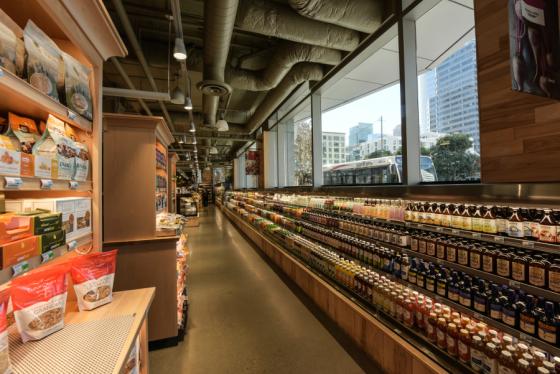 The store, which sits slightly below street level, features a wall of windows along the sidewalk, which required low merchandisers to allow the light to filter into the store

Center store products are merchandised on a handful of shelves — the store offers small carts for customers to use, but it’s more easily shopped with carry baskets. Although the big brands are represented, most of the items are from smaller, more boutique-type companies. Since the store is in a new marketplace, Santa and his team rely heavily on customer feedback for what items to stock.

“Our buyers are pretty astute, but our customers will be vocal about what they like or don’t like,” Santa notes. “We’re still massaging the product selection.”

With its location in the heart of the city, most of Woodlands’ San Francisco customers walk to the store, but the store does offer free valet parking, a verifiable perk in a congested city. It remains to be seen whether this offering will help expand the store’s reach beyond the few city blocks most of its customers currently come from. The community outreach for the store’s opening last August extended just half a mile. Santa is hoping, however, that word will spread about the free parking; the store prominently markets its availability with signage at the store and a placard placed near the street.

Santa has plans to try ecommerce and delivery this year at the San Francisco location, but he knows that his staff’s inherent knowledge and the store’s function as the center of the community are what will ultimately build his business.

“It’s one of the reasons we’re so big on selling prepared foods,” he explains. “We’re about bringing the community together and trying to keep that element alive.”