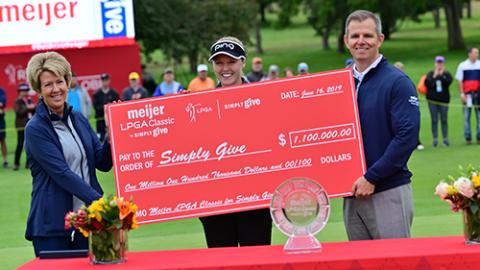 “Our family is so pleased to present this award to Cathy,” noted Meijer Executive Chairman Hank Meijer. “Cathy has been such an amazing ambassador of our company during her 37-year career that it’s only appropriate she is the first team member to receive this annual award.”

The award will go annually to one Meijer associate who best exemplifies the qualities Fred Meijer was known for – leadership through humility, generosity and passion for serving others. The Fred Meijer Award is one of the retailer’s new Legacy Awards, which also include a Presidents Award, that will be presented to several Meijer employees throughout October. These awards honor Meijer associates who are leaving a lasting legacy for their colleagues and communities.

Cooper began her Meijer career in 1982 as a manager at one of the company’s Sagebrush apparel stores and rose through the ranks in the marketing organization before attaining her current role in which she acts as the company’s main contact for the various philanthropic organizations Meijer supports. Cooper also directs Meijer sponsorships of collegiate and professional sports, and is the executive director of the Meijer LPGA Classic for the retailer’s Simply Give program.

As the first winner of the Fred Meijer Award, Cooper’s name will be inscribed on the trophy, which will be a permanent feature of the Meijer Heritage Center. Each year, the award winner’s name will be added to the trophy. She will also receive a vacation designed especially for her and a donation to a community partner charity of her choice.

Privately owned and family-operated Meijer operates 246 supercenters and grocery stores in Michigan, Ohio, Indiana, Illinois, Kentucky and Wisconsin. The Grand Rapids, Mich.-based company is No. 7 on Progressive Grocer’s 2019 Super 50 list of the top grocers in the United States.