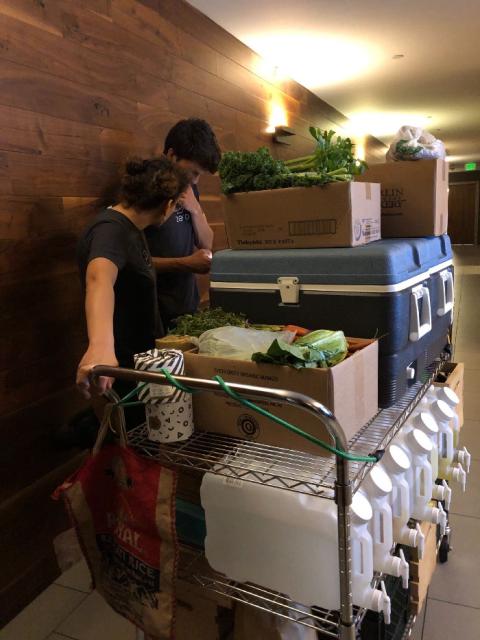 Zero Grocery deliveries come via cart and are based around reusable packages, including jars.

Zero Grocery, an online grocer trying to stand out from the crowd by offering reusable packaging, has raised $3 million in a new funding round, bringing the total to $4.7 million since the company’s launch in 2019.

That may not be a groundbreaking amount of capital, but this new funding round shows how sustainable commerce practices continue to take on a bigger role in food and other types of retail.

Earlier this month, for example, Seattle-based Amazon unveiled Climate Pledge Friendly, a new program to help shoppers find sustainable products. The Climate Pledge Friendly label will appear on more than 25,000 products to show that they have one or more of 19 distinct sustainability certifications, such as reducing the carbon footprint of shipments to customers.

And news emerged earlier this week that Bentonville, Arkansas-based Walmart is working with a startup called Apeel to offer plastic-free English cucumbers to shoppers. The idea is to coat the produce with an edible substance that protects the product from moisture and oxygen.

Zero Grocery, meanwhile, touts itself as the “first online zero-waste grocery store in the U.S.,” according to founder Zuleyka Strasner. The Berkeley, California-based company — which for now delivers only to consumers in 18 cities in the San Francisco area — makes product deliveries in plastic-free containers that are then collected by the grocer and reused.

When customers are done with with their jars and Zero bags, they leave them at their doorsteps for the company’s workers to pick up when they deliver the next order. Consumers who cancel their subscriptions are charged for any jars or materials they still have on hand.

Consumers pay $25 per month to take part in the service, although nonmembers can pay $7.99 per delivery.

The new funding — San Francisco-based venture capital firm 1984 was the source of most of it — comes as online grocery use continues to spike during the pandemic, and as consumer demand grows for sustainable retail practices. Strasner said that “our revenue has grown more than 20 times since the beginning of February. Our tools, website, product selection and team have all grown a tremendous amount.”

Zero Grocery, she added, is in the midst of hiring workers and increasing its delivery capabilities, although no timetable or new markets were specified. The online food retailer, like most startups, has faced its share of recent challenges, she noted.

“Much like other companies in the grocery delivery space, our demand skyrocketed,” Strasner said. “To keep up, we grew our team in half the time we anticipated and launched features that were half-baked. We abandoned our notions of roles and split up the responsibilities of customer service, order packing, feature development, and more.”

Lest you think all of this structural innovation is confined to small operators, Walmart recently detailed its own revision of workplace and leadership roles in its stores.

Further, Zero Grocery isn’t the only way that Berkeley has recently made food retail news.

The city council there has passed an ordinance requiring food stores to carry healthier food and beverages at checkout. The councilors voted unanimously in favor of the measure, believed to be the first of its kind, at least in the United States, at a Sept. 22 meeting, The Mercury News reported.

Walmart U.S. is No. 1 on The PG 100, Progressive Grocer’s list of the top food and consumables retailers in North America, while Seattle-based Amazon is No. 2 on PG’s list.