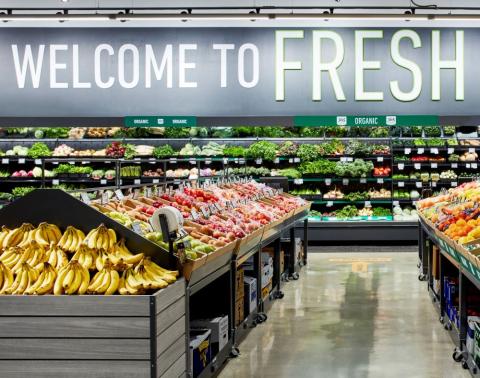 The Fresh banner is not an offshoot of Whole Foods, nor does it look like one of those checkout-less Amazon Go stores.

As the latest Amazon Fresh store opened Thursday in the Chicago suburbs, speculation is building about where the e-commerce operator would open other locations of that grocery concept.

Two leading candidates appear to be in the running, according to recent news reports: Chicago proper, and the Twin Cities in Minnesota.

Block Club Chicago recently reported that a bank building in the Lincoln Square neighborhood on the North Side of Chicago — a multilevel building near two major streets, ample public transit and relatively well-off consumers — could house a grocery store on the first floor. That’s according to a comment from the alderman for the area and recent commercial development plans.

The alderman said he didn’t know the identity of the planned grocery store but other food retailers in the area — based on past comments from local political leaders — suspect the plan is to put an Amazon grocery operation into that building. It wasn’t immediately clear how much space a grocery operation would have in the redeveloped bank building.

In the Minneapolis-St. Paul area, meanwhile, “a mystery national grocer has come forward with plans to redevelop and occupy vacant stores in Eagan and Burnsville,” according to the Pioneer Press newspaper. “Now, after the Burnsville plan came to light this week, city officials and food industry insiders are speculating that e-commerce giant Amazon.com could be the retailer behind the shroud of secrecy in both cities — a move that would mark its first foray into the crowded Twin Cities grocery market.

“What’s raising eyebrows is a name — ‘Mendel; — shown on signage in project renderings submitted to the city by the owner of the shopping center,” the paper added. “'Mendel’ is a name that Amazon has used in planning documents for Amazon Fresh stores in Washington, D.C., and other markets, according to news reports. Amazon’s name does not appear in documents submitted to Burnsville.”

The vacant space there has some 40,000 square feet.

Seattle-based Amazon is No. 2 on Progressive Grocer’s 2020 PG 100 list of the top grocers in the United States.