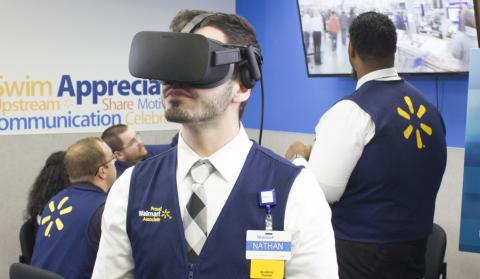 Walmart's Store No. 8 technology-startup incubator – launched in early 2017 to identify changes that will reshape the retail experience – is acquiring Spatialand, a virtual-reality startup that will create the foundation of the incubator’s third portfolio company.

The new venture, which will "operate in stealth," aims to develop and explore new products and uses of VR through immersive retail environments that can be incorporated by all facets of Walmart, online and offline.

Last year, Store No. 8 set out to explore the transformational effects of VR in commerce, and it uncovered an underlying ecosystem of technologies and companies that, when applied to retail, created a "game-changing customer journey," noted Katie Finnegan, principal of Store No. 8 and VP of incubation at Walmart, on the incubator's website. This realization led to the incubator’s entrance into the space, which culminated in its VR gala, Innov8, for which it created a proof-of-concept VR experience with Spatialand CEO and co-founder Kim Cooper and consultant Jeremy Welt on how they envisioned millions might shop in the future. Store No. 8 plans to continue the work it did at the gala.

"This experience transported users to a campsite in Yosemite National Park, where outdoor products such as tents were available to utilize in the same way as when camping, entering the space and judging its size and ease of setup to ensure it is the best product for the customer’s needs," Finnegan said. "And while it’s too early to share more about what the team will be working on next, we're excited to get to work and share more in the future. Together, we will continue to evolve this technology and develop new product exploration through immersive retail environments."

Finnegan, who came to the Bentonville, Ark.-based retailer from Jet.com with its 2016 acquisition by Walmart, will serve as CEO of Spatialand. Cooper will work alongside Welt to run the company.

Cooper is a two-time Emmy nominee and creative executive in design and entertainment who has pioneered groundbreaking VR/augmented-reality/mixed-reality techniques in storytelling and technology. Under her leadership, Spatialand's VR platform has made an impact, creating immersive content destinations as seen in projects with Oculus, Intel, Reebok and Linkin Park. She also has expertise leading innovative work on such films as "Iron Man"; "Rogue One: A Star Wars Story"; and "Prometheus," and such video game franchises as Destiny and Metal Gear Solid.

Welt, a VR strategy and product adviser, has spent the past three years bringing VR and the next generation of content into the mainstream. Over the course of his career, he has played key roles from helping launch YouTube’s first commercial deal to working on the Walt Disney Co.'s acquisition of Maker Studios. Most recently, he has dedicated himself to consulting, advising and investing in immersive media, including work with award-winning companies such as Splash and Mindshow.

"'VR' is an industry buzzword right now,” Finnegan said on Store No. 8's website. "And the majority of the technology that has been created in this space has been focused on the development of hardware and content for spaces such as gaming and entertainment, ignoring the range of possibilities available in retail. At our core, we are merchandisers and storytellers, which drives us to believe that virtual reality has the potential to reinvent the consumer experience – with an experience we call contextual commerce."