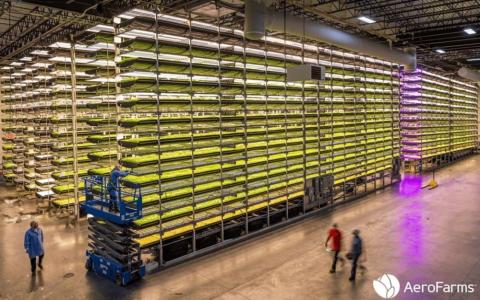 One of the rapidly innovating forms of agriculture and the hottest trend on Wall Street are colliding. Indoor vertical-farming company AeroFarms has entered into an agreement and plan of merger with Spring Valley Acquisition Corp., a special-purpose acquisition company (SPAC) — a new type of investment vehicle making headlines in the financial world.

Based in Newark, New Jersey, AeroFarms has been innovating vertical farming for 15 years. As a certified B Corporation and public-benefit corporation since 2017, AeroFarms is on a mission to grow the best plants possible for the betterment of humanity. AeroFarms has developed patented, award-winning technology in areas such as plant biology, mechanical design, environmental control, data science, operations and plant genetics. According to the company, it achieves up to 390 times greater productivity per square foot annually versus traditional field farming while using up to 95% less water and zero pesticides. With more than 250 invention disclosures and a vast library of data, AeroFarms is continually improving its systems to understand plants and solve agriculture-related supply chain issues.

There’s a $1.9 trillion total addressable market opportunity within AeroFarms’ core leafy greens market and other adjacencies. The company is currently selling leafy greens products under its Dream Greens brand in the Northeast at major retailers such as Whole Foods Market, ShopRite, Amazon Fresh and FreshDirect.

AeroFarms’ recent transaction allows the company to be publicly traded on Nasdaq under the new ticker symbol ARFM. The combined company will be led by David Rosenberg, co-founder and CEO of AeroFarms.

Following the expected second-quarter 2021 transaction close, the new combined company is expected to have an estimated pro forma equity value of approximately $1.2 billion.

According to CNBC, a SPAC is essentially a shell company set up by investors with the sole purpose of raising money through an IPO to eventually acquire another company.Virgin Galactic, DraftKings, Opendoor and Nikola Motor Co. have all gone public by merging with SPACs. Roughly 200 SPACs went public in 2020, raising about $64 billion in total funding, nearly as much as all of last year’s IPOs combined, according to Renaissance Capital. Office-sharing startupWeWork also recently agreed to go public through a SPAC deal with BowX Acquisition.

Targeting companies focused on sustainability, Dallas-based Spring Valley is a blank-check company formed for the purpose of entering into a merger, share exchange, asset acquisition, share purchase, reorganization, or similar business combination with one or more businesses or entities.