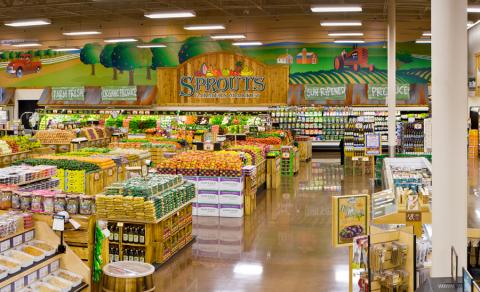 Net sales for Q3, which ended Oct. 1, were $1.2 billion, a 16 percent increase compared to the same period in 2016. Net sales growth was driven by 4.6 percent growth in comparable-store sales and strong performance in new stores opened.

Gross profit for the quarter increased 19 percent to $346 million, resulting in a gross profit margin of 28.7 percent, an increase of 60 basis points compared to the same period in 2016. This improvement was primarily driven by cycling a heightened promotional environment in the third quarter of 2016, in addition to leverage from increased comps.

“Sprouts’ hallmark of fresh, healthy, affordable products continues to resonate with our customers and positions us as a leader in the industry,” said Amin Maredia, Sprouts CEO. “We’ll continue to accelerate strategic priorities that will enhance our business – from product assortment to the digital experience to customer service. These, coupled with our technology investments to drive efficiencies, will provide the flexibility to make future investments where needed to ensure Sprouts is well-positioned for the future.”

During Q3, Sprouts opened eight new stores: one each in Arizona and Florida, and two each in California, Nevada and Tennessee. Three additional stores have opened to date during Q4, resulting in a total of 32 new stores opened year-to-date.

In other Sprouts news, Joseph O’Leary has joined the board of directors, effective Oct. 30. He currently serves on the board of Francesca’s Holding Corp., an operator of nationwide specialty boutiques, and pet products retailer PetSmart Inc. Prior to those roles, O’Leary served in various executive leadership roles at PetSmart, including most recently as president and COO, as well as EVP of merchandising, marketing, supply chain and strategic planning.