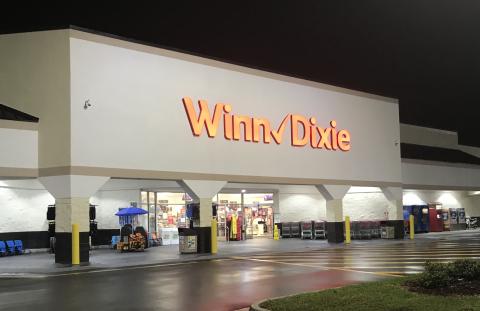 Southeastern Grocer's Winn-Dixie banner accounts for 366 of the company's total store base of 420 locations that remains after recent divestitures.

New stores, increased store-brand penetration, loyalty program expansion and continuation of an effective store remodeling program are among the key elements of a growth strategy Southeastern Grocers detailed for the first time in a regulatory filing related to its planned public stock offering.

Key drivers of sales growth at Southeastern Grocers in the coming years are expected to involve the addition of roughly 10 new stores annually and execution of a store-renewal program the company said yields a 10% per store increase in sales. The company, which operates 420 stores in five Southeastern states, has touched about half of its locations with the renewal initiative and expects the entire store base in Florida, Georgia, Alabama, Louisiana and Mississippi, will be renewed by 2024.

The company also provided details on its three distinct formats; Winn-Dixie, Harvey’s and Fresco y Más. Winn-Dixie is the dominant banner, accounting for 366 stores and averaging 48,000 square feet with 35,000 SKUs. The second most common banner is Harvey’s with 46 stores averaging about 38,500 square feet and about 26,000 SKUs presented in a no-frills environment. The least prevalent format, but perhaps one with the greatest potential considering 76% of Southeastern Grocers stores are located in Florida, is the Hispanic focused Fresco y Más concept. Introduced in 2016, Fresco y Más stores are of a similar size and SKU count to Winn-Dixie, which is explained by the fact that many of the locations are conversions of former Winn-Dixie locations.

“Over our more than 95 year history, we have established a difficult to replicate network of attractive, well-maintained stores, which are often located in high-traffic areas in close proximity to densely populated residential neighborhoods,” the company noted in its filing with the Securities and Exchange Commission. “We strive to build a strong connection with our customers and differentiate ourselves from our competitors by providing a compelling shopping experience that combines a full-service, one-stop shop, emphasizing high-quality, fresh and locally tailored offerings, with excellent customer service and competitive prices.”

In addition to new selling space and improving the productivity of existing store locations, Southeastern Grocers’ growth plans also include:

If Southeastern Grocers is able to execute a successful IPO, it will be a remarkable accomplishment for an organization that has experienced a fair amount of turmoil the past decade. In 2012, Bi-Lo and Winn-Dixie merged and subsequent acquisitions followed, including the Sweetbay and Harveys banners in 2013, that results in challenges.

“While we realized positive initial results from our expansion and have benefited from exposure to the attractive Florida market, the increased attention required to integrate these stores and implement a new supply agreement, as well as significant price investments, including a switch to an everyday low price strategy in 2016, hampered our financial performance,” the company noted.

In 2017, the company named veteran retailer Anthony Hucker CEO and, under his leadership, developed a transformation plan that included a bankruptcy filing that allowed the company to restructure. In May 2018, Southeastern Grocers emerged from the brief reorganization process with improve financial flexibility to pursue a growth strategy.

“This plan focused on deleveraging the balance sheet and stabilizing the business through a series of retail best-practices and cost-savings initiatives targeted at improving cost controls, increasing sourcing and labor productivity and returning to our historical high-low pricing architecture. We also increased investments in our store base, loyalty program and private-label "Own Brands" capabilities,” the company said.

More recently, Southeastern Grocers sold 62 stores, comprising 46 Bi-Lo stores and 16 Harveys, located throughout the Carolinas and Georgia to Food Lion, a subsidiary of Ahold Delhaize. The company also agreed to sell an additional 23 stores in South Carolina and Georgia to Alex Lee. The company also exited the pharmacy business by selling prescription files at 58 stores to CVS and Walgreens.

Jacksonville, Florida-based Southeastern Grocers is one of the largest conventional supermarket companies in the United States, with grocery stores, liquor stores and in-store pharmacies serving communities throughout Alabama, Florida, Georgia, Louisiana, Mississippi, North Carolina and South Carolina. The company is No. 34 on The PG 100, Progressive Grocer’s 2020 list of the top food and consumables retailers in North America.