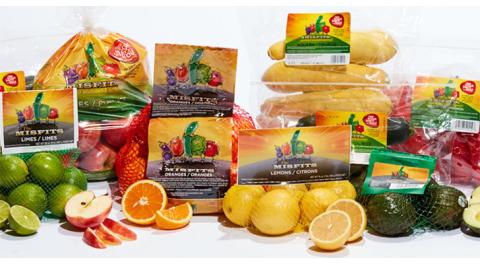 Price Chopper/Market 32 is now offering the Misfits produce line at 15 of its stores in New York, Massachusetts, Vermont and Connecticut.

The line of misshapen but still edible produce, from Eden Prairie, Minn.-based Robinson Fresh, provides more fruit and vegetable variety at a lower cost while helping to reduce produce waste.

By selling less cosmetically pleasing produce, Price Chopper/Market 32 is aligning with USDA’s aim of reducing food waste by 50 percent by 2030.

“Price Chopper/Market 32 is committed to doing our part to reduce food waste, with programs like Fresh Recovery, through which we salvage tons of nonsalable but entirely edible fresh food at store level for the Feeding America foods banks in our marketing areas,” the company said. “Misfits is a natural extension of this commitment, as it gives our customers the impetus to reduce waste at the household level while highlighting the amount of fresh produce wasted in the U.S. due to cosmetic imperfection.”

“We understand there is produce left in the field because farmers don’t think there is a market for it,” noted Craig Arneson, Robinson Fresh general manager of the North Region. “With the Misfits program, farmers have an outlet to sell more produce, and customers have an opportunity to save money and help reduce waste.”

On a weekly basis, four to six Misfit commodities are delivered to the participating Price Chopper/Market 32 stores, based on what’s seasonally available and peaking in freshness. Misfits produce is sold at a 20 percent to 30 percent discount.

Other food retailers to implement the Misfits program include Hannaford, Hy-Vee, and Shoppers Food & Pharmacy.

Based in Schenectady, N.Y., the Golub Corp. owns and operates 134 Price Chopper and Market 32 grocery stores in New York, Vermont, Connecticut, Pennsylvania, Massachusetts and New Hampshire. The family-managed company’s 20,000 associates collectively own more than 44 percent of its privately held stock, making it one of the nation’s largest privately held corporations that’s predominantly employee-owned.