A small number of food retailers have struggled more than others to remain relevant in an increasingly competitive market over the past year.

Take Whole Foods Market (No. 9), for instance. Once the darling of, and a pioneer in, the natural and organic grocery sector, the Austin, Texas-based retailer is finding it hard to maintain its footing as food prices deflate and traditional and hard-discount grocers build up their own natural and organic programs. In February, the grocer posted its sixth consecutive quarter of declining comparable-store sales, during quarter one of fiscal 2017. It also plans to shutter the remaining two of its three commissaries, as well as closing more stores than it’s opening in quarter two.

Ready to make a change, New York-based investment firm Jana Partners and several food retail experts in April purchased a 9 percent stake in Whole Foods, collectively making them the chain’s second-largest investor. The group revealed its intent to hold discussions with the retailer’s board and management regarding such topics as changing board and management makeup, advancing brand development, and addressing deficiencies in areas such as customer loyalty, analytics, and other digital and marketing capabilities.

There’s also the possibility of a push for Whole Foods’ outright sale. Around the time that the new investors took their share, Bloomberg reported that Seattle-based ecommerce giant Amazon had considered a takeover of the chain last fall but didn’t follow through — though it could still be in the running. As this issue went to press, experts were speculating that Kroger was mulling a bid for the grocer, and that Albertsons parent Cerberus Capital Management was in preliminary talks with bankers about making one.

Whole Foods isn’t the only beleaguered chain under scrutiny by third-ranked Albertsons. Following rumors that Northeastern grocery chain Price Chopper (No. 24) was up for sale last year, Reuters reported in November that the Boise, Idaho-based company was in “advanced talks” to acquire the chain for about $1 billion. Both companies declined to comment on the report.

In the meantime, Price Chopper is continuing the conversion of its namesake locations to fresh-focused Market 32 stores. Spokeswoman Mona Golub told PG last August that following the “tremendous customer response” to Market 32, the company has formed a board finance committee to explore capital partnerships to accelerate the conversions.

Other grocers appear to be in even more dire straits, in particular two regional operators. A year after revealing an ambitious 30-store remodeling plan, Indianapolis-based Marsh Supermarkets (which missed being included in PG’s Super 50 ranking this year) was reported by creditors as defaulting on its bills for rent and contracting services. The grocer has since announced a spate of store closings.

Also in the Midwest, Joliet, Ill.-based grocery cooperative Central Grocers (No. 46) revealed plans in April to sell 22 Strack & Van Til stores and close nine of its Ultra Foods-bannered locations, citing fierce competitive forces. Also, at press time, it was poised to sell its warehouse, from which it supplies independent grocers with Centrella brand products. The news came after Strack & Van Til, during the prior 18 months, had launched a new concept store and expanded its ecommerce curbside pickup program. 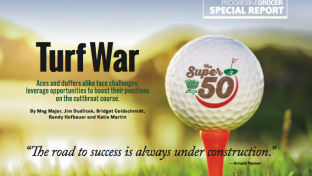 As is PG’s custom every year, we’ve ranked the industry’s top 50 food retailers, based on the total sales generated in their most recent fiscal years.