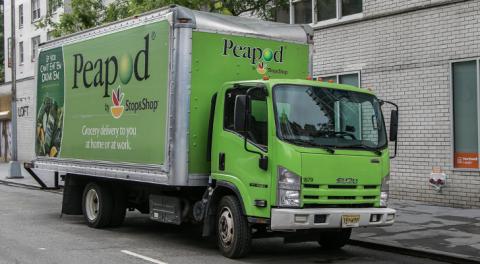 Ecommerce grocer Peapod, a division of Carlisle, Pa.-based Ahold USA, has officially revealed plans to relocate its headquarters to downtown Chicago, aiming to complete the move by next spring.

The new location, at 300 S. Riverside Plaza, will house all employees at its current headquarters in the nearby suburb of Skokie, Ill., along with a small number of employees already working in downtown Chicago, at the Civic Opera Building. Peapod employs roughly 300 corporate workers in the Chicago area, roughly two-thirds of whom currently work in the Skokie office, the Chicago Tribune reported.

"Since Peapod was founded in Chicago in 1989 as the country's first online grocer, we have always considered this city our home," said Walt Lentz, acting president of Peapod. "Moving our headquarters downtown will allow us to become a bigger part of the Chicago business community and invest in the city's diverse pool of talent while also growing our business throughout the country."

Peapod is joining a number of other major food industry companies to relocate from the suburbs to the city, including McDonald's, Conagra Brands, ADM, Mead Johnson, Beam Suntory, Kraft Heinz and Oscar Mayer.

With the move, Peapod plans to continue its support of the Chicago community, including increased involvement with the Greater Chicago Food Depository. Peapod has long supported the food bank and will continue to partner through employee volunteering, fundraising and food donations.

"Every day we distribute 164,000 meals across Chicago," noted Kate Maehr, executive director and CEO of the Greater Chicago Food Depository. "We can't do this alone, and count on support from businesses such as Peapod. As a grocer, Peapod is a valuable partner, and with their help, we'll continue to fight hunger in Chicago and work to ensure all of our neighbors have enough to eat."

Chicago Mayor Rahm Emanuel lauded the grocer’s relocation plan, noting that Peapod is a “national leader in both the food and tech industries,” and that it “will be a strong addition to Chicago’s thriving innovation community.”

"In Chicago, the company can continue to expand, create new jobs and contribute to our growing economy," noted Emanuel.

Also praising the decision was Illinois Gov. Bruce Rauner, who said that Peapod has spent the last 28 years revolutionizing “the way people across the nation shop for groceries.”

"My administration is proud to work with companies that embrace innovation and push our economy forward,” noted Rauner. “I will continue to work hard to support great companies and make our state an even better place to do business."