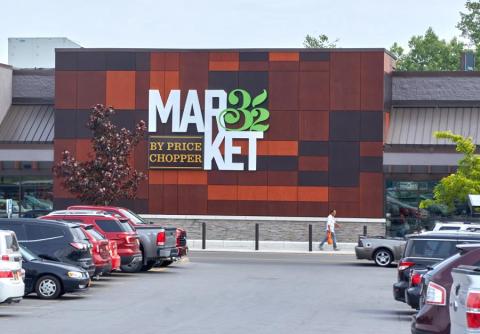 A Brattleboro, Vt., Market 32 has started charging customers for paper bags to get them to switch to reusable alternatives

Price Chopper’s Market 32 store in Brattleboro, Vt., has begun charging for paper bags to deter customers from using them and to further encourage shoppers’ conversion to heavy-duty reusable alternatives.

The store's customers will now pay 5 cents for each disposable (handle-less) paper bag used, or 10 cents for each handled paper bag – a transitional low-cost reusable alternative – and get a 3-cent rebate for every bag, box or tote brought back to the store for reuse. The location will also continue its regular promotion of heavy-duty reusables.

“The Town of Brattleboro’s legislation, which banned thin-film single-use plastic bags as of July 1, made no mention of paper bags, which are just as disposable and detrimental to the environment as thin-film plastic ones,” noted Mona Golub, Price Chopper’s VP of public relations and consumer services. “At the time, we erected signage in our store announcing our intent to stop handing out free disposable paper bags on Oct. 1. As we continued to discount heavy-duty reusable bags in an effort to help the community transition forward, we hoped that the noble intent of the law would encourage conversion to heavy-duty reusables. In actuality, most customers converted to paper bags, while fewer than 15 percent invested in long-term reusable alternatives. Our follow-through is intended to drive results toward nondisposable solutions.”

Paper bags are more expensive to recycle than plastic bags and don’t biodegrade easily in landfills, due to their inherent lack of oxygen. They are also less likely than plastic bags to be reused and have a higher cost and larger carbon footprint associated with their production and distribution.

“Behavioral change is a challenge in this convenience-driven era, but the prospect of retail, government, consumers and environmental advocates working together to diminish the production, distribution and disposal of bag waste has great merit, now and into the future,” added Golub. “Price Chopper/Market 32 fully supports this effort and is committed to investing our resources in changing the way we purchase, stock, distribute, promote, sign and pack reusables in an effort to help our customers transition to whichever long-term solution best suits them.”

“Billions of plastic bags are used in the U.S. each year, with less than 5 percent being recycled and more and large amounts being swept into rivers and streams, and ultimately the ocean,” said Judith Enck, former EPA regional administrator and visiting professor at Bennington College, which is located in Vermont. “While stopping the use of plastic bags is key, it is imperative that consumers shift to reusable bags. Price Chopper has come up with an innovative and effective approach that continues the ban on plastic bags, while adding a modest fee on paper bags. This will encourage consumers to shift to reusable bags. It is easy for consumers, once they start getting in the habit of bringing their own bags. Hats off to Price Chopper for taking this major step that I hope other supermarkets around the country will follow.”

“With patchwork legislation being discussed all around us, though seldom passed, we decided to take a stand and exercise prudence in moving the issue forward, ourselves,” observed Golub.

The Schenectady, N.Y.-based Golub Corp. owns and operates 133 Price Chopper and Market 32 grocery stores in New York, Vermont, Connecticut, Pennsylvania, Massachusetts and New Hampshire. Golub’s 20,000 employees collectively own more than 44 percent of the company’s privately held stock, making it one of the nation’s largest privately held corporations that’s predominantly employee-owned. The company is No. 24 on Progressive Grocer’s 2018 Super 50 list of the top grocers in the United States.