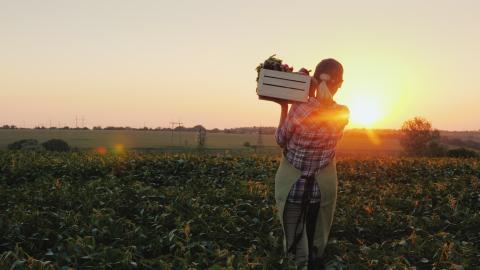 About $600 billion worth of food is lost at harvest or soon after.

With 33% to 40% of the world’s food lost or wasted annually, stakeholders throughout the entire supply chain are working to find ways to combat the issue. A new report from McKinsey & Company takes an in-depth look at where and how food gets lost, as well as what manufacturers and food retailers can do to address food loss and turn it into an opportunity.

The term “food loss” refers to loss that happens at harvest or soon after and makes up about half of the food that doesn’t get eaten by humans. That loss is worth an estimated $600 billion, according to the report, making food loss reduction a societal and environmental priority.

[Read more: "How Grocers Are Managing the Large-Scale Problem of Food Waste"]

As for addressing food loss, McKinsey’s Moira Borens, Sebastian Gatzer, Clarisse Magnin and Björn Timelin write: “It should become a business priority as well. Our in-depth examination of the farm-to-retailer food supply chain reveals that food loss is a result of inefficiencies, and its hidden costs are often equal to or greater than retailers’ net profit — even the best-performing ones.”

Secondary effects of food loss and waste are indeed staggering. The water consumption linked to it amounts to approximately one-fourth of the world’s freshwater supply and greenhouse gas emissions from food loss and waste constitute 8% of the global total. McKinsey’s report found that fruits and vegetables, cereals, and roots and tubers account for a majority of the negative environmental impact of food loss.

Moreover, food loss can be caused by myriad factors, ranging from exogenous factors, such as weather events, or suboptimal practices within a specific stage of the supply chain. Some loss is also linked to the interdependencies and interactions among players in the value chain, such as grower overproduction due to market demand uncertainty and lack of transparency into supply among manufacturers and retailers.

“Solving the food loss problem will therefore require fundamental changes in the ways that stakeholders work together,” the authors wrote.

As for manufacturers and food retailers, McKinsey recommends gathering directionally accurate information by interviewing internal teams, examining data from suppliers and reviewing third-party research. Working with suppliers to understand and monitor food loss can be extremely important, as well as setting targets for both companies and suppliers. Further, businesses should integrate food loss visibility and reduction into incentive structures and also participate in industry efforts to set reporting and certification standards.

“At most companies today, the unfortunate reality is that food loss is no one’s problem,” the authors wrote. “No individual or team owns and champions the issue. In a sense, companies have had the luxury of not having to pay too much attention to food loss. That could soon change: as the world moves toward a potential food emergency and as public awareness of the issue grows, external stakeholders will become savvier about food loss and, as a result, more demanding.

“They will compel retailers and manufacturers to act. Simply put, addressing food loss now isn’t just a good thing to do; it’s also good business—and soon it won’t be optional,” they concluded.