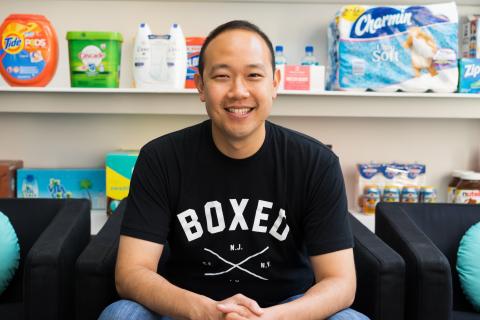 If you're wondering what's been going on with Boxed, the New York-based online grocery retailer that has been dubbed a "Costco for Millennials," the answer to that question may be obvious.

And that answer, according to the company, is "tremendous growth" over the last 12 months delivering groceries, as pandemic-driven demand for online shopping has exploded.

"What COVID has shown to every single retailer on the face of the earth is that e-commerce is here to stay and the trends are not going to reverse," Chieh Huang, CEO of Boxed, said in an exclusive interview with Progressive Grocer. "And so for the folks that have treated e-commerce as a luxury, they have to get serious now."

But what may not be so obvious is that Huang and his team at Boxed are investing some of that momentum into growing their business beyond selling groceries. For example, Boxed now sells digital advertising and has an online marketplace for third-party sellers.

More recently, though, the company scored a major win to help a retailer "get serious," as Huang put it, about e-commerce.

In January, Boxed signed a deal with Japan's largest supermarket chain, Aeon, to develop their e-commerce network, end-to-end, in Malaysia. Aeon, which has more than 21,000 stores across 14 countries, generated $83 billion in revenue in 2020. Rather than build their own technology internally, the company came calling to a tech startup like Boxed as they eyed the future of grocery shopping.

"The deal evolved over time where initially it was more just about exchanging ideas," Huang said. "As they learned more about the software, there was a moment where we felt like wow, you know, this software that we built that powers everything, everything about our business — whether it's the front end, the inventory management, the warehouse management system, the ad platform, even the physical robotics that could be very valuable to retailers around the world — could modernize their technology."

Aeon was already an investor in Boxed. But the deal, which Huang said is worth in the tens of millions, is the start of Boxed scaling up its software-as-a-service (SaaS) enterprise business; more partnerships are on the way this year, Huang said. Boxed is one of the few e-commerce companies that writes its own software, runs its own fulfillment centers and builds its own automation robotics in-house.

"We're looking to partner up with additional retailers on the software side, both internationally, as well as domestically," Huang said. "We've already had several discussions on both fronts. So we're looking forward to making Aeon a very happy customer, and growing to other customers."

Huang says the Boxed solution for Aeon is a one-stop shop to modernize its e-commerce.

"So it's the website, mobile app, inventory management, robots, warehouse management, the CRM system, all of it," he said. "So in essence, anyone theoretically wanting to get started in e-commerce or revamping their e-commerce can make one phone call and have a white label version of what we built set up pretty quickly for them," he said.

Huang says the key to Boxed's SaaS solution is that it's geared toward people building a basket, whereas 99% of software out there for e-commerce is not geared toward building a basket. "Other software is geared toward someone buying, you know, a single T-shirt or someone buying a laptop and just one item and checking out," he said.
To grow its SaaS division and other business units, Huang says the company is now focused on increasing head count across the board.
"So now that we have two big business units, you're gonna see a lot of hiring," he said.

However, Huang points out that one of the downsides of the pandemic, in addition to supply chain challenges, has been increased costs.

"The temperature monitors, the PPE, the extra employees to keep things clean and sanitized — we're incurring a lot of costs. And I don't think we're going to be able to unwind those costs anytime soon," he said.

Founded in 2013, Boxed was reported by Reuters in September to be exploring strategic options, including a sale or going public through a merger with a blank-check acquisition company that could value it at around $1 billion. The company has raised over $240 million in funding from investors including American Express and GGV Capital, and was last valued at $600 million in 2018, according to PitchBook.

Boxed currently operates three U.S. warehouses, which deliver bulk-sized groceries to customers for an annual fee of $49, and Huang says another one is poised to come online in 2021.

"Now that our robotics are rolled out in our newest facility in Dallas, it's tuned to be quite efficient already," Huang said. "So we're now a lot more comfortable opening up new facilities and automating them completely with that technology."

Like many food retailers, Boxed has benefited from a boom in online sales. Huang says those online grocery sales are here to stay.

"We're lapping into a full year of us in this environment. And after you do something for a full year, it starts to become a habit. And so that's the reason why I'm very bullish about e-commerce in general," he said.