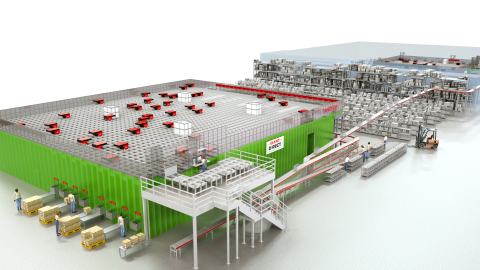 AutoStore technology and Swisslog software serve as the foundation of a new micro-fulfilment center under development in the Philadelphia area with The Giant Co.

Grocers learned a painful lesson throughout the pandemic about the high cost of e-commerce fulfillment, recognizing that automation will play a key role in the profitable execution of a digital grocery strategy.

Major investors have recognized that reality too, which is why one of the world’s foremost technology investors, Japan’s SoftBank, just spent $2.8 billion to acquire a 40% stake in Norway’s micro-fulfillment leader AutoStore. The investment values AutoStore at $7.7 billion and is meant to accelerate the company’s global expansion.

"We view AutoStore as a foundational technology that enables rapid and cost-effective logistics for companies around the globe. We look forward to working with AutoStore to aggressively expand across end markets and geographies,” said Masayoshi Son, chairman and CEO of Softbank Group.

AutoStore currently works with customers at 600 locations in 35 countries operating 20,000 robots. The company’s value proposition is that the cubic design of its automated storage and retrieval systems, coupled with proprietary software allows customers to either store four times the inventory in the same space or all of their existing inventory in 25% of the space.

The company’s approach to “redefine space,” has application beyond grocery, although recent moves in food retailing with H-Mart and Ahold Delhaize have garnered a lot of attention. AutoStore also works with other types of e-commerce retailers and industrial and healthcare clients.

As Karl Johan Lier, AutoStore’s president and CEO explained, the company is on a journey to automate all commerce and deliver best-in-class automation solutions. The addition of Softbank as an investor adds to a world class group of those willing to financially support the company’s vision.