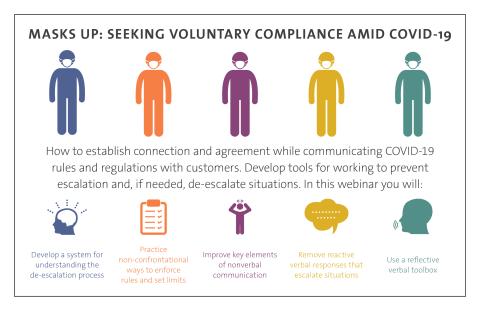 Nowadays, mental health workers are everywhere. They work in schools, stores and libraries; they drive buses and trains and repair our roadways. They manage properties and provide services, and in doing so interact with vulnerable populations and stressed-out individuals every day. In reality, though, these folks aren’t mental health professionals. Most importantly, they’re usually untrained in this vital area.

Grocery workers are no exception. They regularly see people in their communities who are stressed and anxious, whether it’s about day-to-day difficulties or, increasingly, economic uncertainties. They need guidance on how best to communicate with and help the wide range of people with whom they’re interacting with during their shifts. Now there’s a hot-button issue added to the mix – enforcing mask requirements – which is escalating opinions, emotions and confrontations in grocery stores across the country.

As the director of a mental health training institute, the most frequent request I get from other organizations is for crisis de-escalation training. What I usually hear is that customers are becoming “difficult to deal with,” that they’re exploding at the workers, who “need de-escalation skills.” It appears that the weight of the pandemic is creating a perfect storm: stress and overwhelming circumstances are causing outbursts and the threat of violence unlike ever before. There’s so much uncertainty in almost all areas of people’s lives that they’re living on a psychological knife edge and don’t even realize it.

Being told that they’re required to wear a mask in the store may be the thing that sets off all of that stress – and an hourly employee with little to no mental health training is on the receiving end of an outburst and must de-escalate it safely and quickly. For those working in grocery stores, this likely isn’t in their job descriptions, and yet, here we are. What can be done to help these front-line workers as tensions only continue to rise during the pandemic?

First, it’s helpful to understand what stress does to a person. When people are stressed, they go into a kind of survival mode where rational communication becomes nearly impossible. What we find is that most individuals’ responses to irate outbursts actually make the situation worse, not better, and that being upset is essentially the same as a mental health crisis and needs specialized interventions. This is what we teach, and it’s almost always a different set of responses from what people are used to.

De-escalation mode is not a problem-solving process – that can come later or never, depending on the context and situation. When a person screams that they’re not going to wear a mask, one de-escalation strategy is to treat the person as an ally, not an enemy; and that’s why we teach empathic responses that build a connection. Here are some examples:

In other words, connect with them through empathy, if that’s possible, rather than confronting them with rules or logic.

Empathy can be generated quickly by following some simple steps:

This could be responding to an outraged customer by acknowledging that “you’re not feeling the mask thing.” This can be disarming because it’s nonconfrontational and shows that you’ve heard the person and are sensitive to their feelings. Empathy promotes connection, and connection reduces tension. It’s a skill that can be quickly developed and embodies the idea of being nonjudgmental – another important element in de-escalation.

Threats will quite predictably set off a defensive response in the brain. Instead of saying, “If you don’t wear the mask, you can’t come in,” we teach people to create options: “You can wear your own mask, or grab one of our free ones.” Again, this is disarming – the thinking part of the brain tries to work out what to do.

This is about finding a shared goal: “Help us out with the mask thing so we can keep the store open” is the kind of script that matches this idea. We both want the store to remain open, so we’re working together toward the same goal. We’re looking for things to agree on, rather than focusing on areas where there’s disagreement.

Ultimately, the goal is the person’s voluntary compliance, even if it’s reluctant. Workers who realize that they’re not going to be able to make someone comply are halfway there. The next step is to create the kind of interaction where someone will de-escalate themselves and potentially start to comply, because fighting about it isn’t something the associate is doing with them.

Send a Message
Russ Turner is the director of the People Incorporated Training Institute, based in Eagan, Minn. Read More