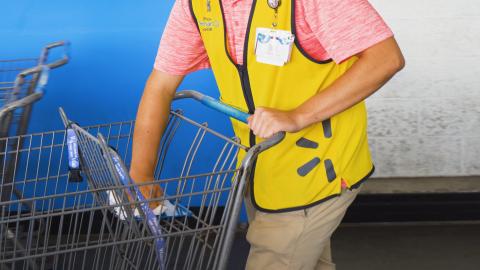 Last year many grocery retailers including Walmart boosted wages for their workers.

Several jurisdictions in California are mandating “hero pay” increases for grocery store workers, a trend that appears to have started in New York City and could keep spreading throughout the country.

This week, the Long Beach City Council unanimously approved an ordinance requiring grocery stores with at least 300 employees nationwide or more than 15 employees per store to pay workers an additional $4 per hour for at least 120 days. The Long Beach Press-Telegram reported that officials in the city of Los Angeles are also working on similar pay raises for grocery store workers. Long Beach Councilwoman Mary Zendejas told the newspaper: “I’m so grateful to have stood with my colleagues in support of hero pay for our essential grocery workers.”

The California Grocers Association, which represents more than 300 retailers, has filed a lawsuit asking a federal court in Los Angeles to invalidate the law. It’s also seeking a preliminary injunction to stop the city from implementing it, CGA said.

In a statement to Progressive Grocer on Jan. 21, CGA President Ron Fong said "grocery store workers are front-line heroes, and that’s why grocers have already undertaken a massive effort to institute measures to make both workers and customers safer in stores. But this ordinance is clearly illegal in that it interferes with the collective-bargaining process and singles out only certain grocers while ignoring other retail workers and workers in other industries providing essential services during the pandemic.

“This ordinance could lead to higher grocery prices and severely limit store viability — resulting in limited store operating hours, reduced hours for employees, fewer employment opportunities, and most concerning, possible store closures. These negative impacts would be felt most acutely by customers and workers in low-income and disadvantaged communities.”

Last year grocery retailers including Publix, Kroger, Walmart and many independent food retailers boosted wages for workers. Kowalski's Markets in Minnesota, for example, instituted a $2 increase in March 2020 and has continued to pay employees that bonus ever since. But many other retailers allowed wage increases to expire, and some cities and counties are taking matters into their own hands when it comes to wages for essential workers. The trend appears to be spreading rapidly.

This week, Berkeley, California, was moving quickly to approve an emergency ordinance that would give grocery store workers there an extra $5 per hour during the pandemic. Authored by newly-elected council member Terry Taplin, the emergency ordinance would guarantee hazard pay for grocery store workers in stores with more than 300 employees, and whose physical stores are at least 25,000 square feet.

The city of Santa Ana is also looking into giving grocery and pharmacy employees an extra $4 an hour in hazard pay. The cities of West Hollywood, Santa Monica and San Francisco are all mulling a $5 increase.

Earlier this month the Los Angeles Board of Supervisors approved a $5 pay bump.

Grocery store workers in Washington state are lobbying local and state officials to get their hazard pay back, aided by union UFCW Local 367.

New York City was first to introduce a "hero pay" measure back in April, and Pennsylvania followed suit with a hazard pay bill introduced in that state's Senate. Both of those measures have so far stalled, but New York Gov. Andrew Cuomo is urging the Biden administration to include such a measure as part of the next pandemic stimulus package.