Egg substitutes soared in popularity during the pandemic as consumers rediscovered home baking and set about adapting ingredients to their dietary needs.

A period of reckoning has arrived for the food retailing industry. After the onset of the pandemic more than a year ago caused a massive spike in sales, there was a steady deceleration in the rate of growth throughout 2020. The new year began the same way, but now, as retailers are in the midst of lapping the great pantry-loading period of 2020, sales comparisons have become extremely challenging and the growth outlook for the remainder of the year remains murky.

The overall deli department’s once-in-a-lifetime growth numbers were held back somewhat by challenges in the deli prepared area, where sales declined 16.6% to $13.8 billion. However, the full-year figure doesn’t tell the true story of a section that appears poised for a rebound in the second half of 2021. The deli prepared area saw sales declines of 30% or more during the early months of the pandemic, but then retailers figured out how to modify their operations and resume sales. Declines persisted as fewer people ventured inside stores, with the low double-digit declines becoming the norm in late 2020 and the start of 2021.

The big winner of all of the perimeter departments during the pandemic was seafood, with sales advancing 30.5% to $6.2 billion. However, the trajectory of sales in seafood appears to have been driven somewhat by supply chain disruptions early on in the pandemic that caused in-stock challenges in other protein categories. For example, meat sales surged 41.3%, 32.9% and 42.8% during March, April and May, respectively, before falling back to Earth somewhat to grow in more of the 15%-to-20% range.

By comparison, shoppers showed little interest in seafood during the early days of the pandemic, with sales rather muted in March and April. Then the category caught fire in May, June and July, growing more than 40% each month, with sales maintaining a near, or above, 30% monthly rate of growth through the 52-week period ending Feb. 21.

Optimism Prevails Among Some

“The challenges in the supply chain are numerous from demand predictability, production capacity constraints, port delays, carton and driver shortages, as well as higher input and transportation costs,” says Matt Kramer, KPMG’s national sector leader for consumer and retail. “Ensuring products are efficiently delivered through the supply chain to customers with greater transparency will be both a challenge and significant focus in 2021.”

Regarding transparency, retailers continue to take unusual actions to manage shopper expectations regarding product availability in key categories that aren’t yet back to normal. Among the most notable of these are household cleaning and paper products. For example, in March, Lakeland, Fla.-based Publix Super Markets was still displaying shelf edge signs in the household cleaning section alerting shoppers that “[i]tems in this section have limited availability due to supplier production issues.” Issaquah, Wash.-based Costco took things a step further by posting a member notice near its Kirkland Signature brand paper towels to let shoppers know that it had reduced the size of the roll. “Due to industry-wide demand for paper towels, we have reduced the number of sheets per roll from 160 to 140 in order to provide better supply to our members,” the warehouse club retailer informed customers.

We Just Aren’t Sure

Since most Americans have never lived through a pandemic before, it’s hard to know when it’s over and what normal looks like on the other side. It’s harder still to forecast shopper behavior and demand for key categories.

At a high level, vaccine rollouts have contributed to a decline in overall anxiety levels among shoppers in the United States and globally. In the United States, 64% of shoppers surveyed in January said that they felt safe going inside stores, compared with 51% during December, according to a survey of 1,000 shoppers that multinational professional services network Deloitte conducts monthly. The firm began conducting the monthly survey at the onset of the pandemic to better understand the interplay between personal safety and economic vulnerability as a driver of purchase decisions and consumer behavior.

While reduced anxiety is a good thing, Deloitte contends that “consumers are balancing near-term optimism with longer-term expectations. Consuming at home and avoiding crowds are likely to remain after the health crisis has passed.”

The way this plays out from a food industry perspective is that 55% of global consumers surveyed plan to continue cooking more at home than pre-pandemic; 38% plan on ordering more takeout or delivery than pre-COVID, rather than eat in-person at a restaurant; and about 40% of respondents plan to eat at restaurants less frequently.

The other behavior change that Deloitte has identified is a permanent shift in shopping behavior. Half of those surveyed plan to do more shopping online, but it’s the shift in their motivations for doing so that’s telling. For example, last April, safety was the top reason cited by consumers for using click-and-collect. In recent surveys, however, safety has been replaced by “cheaper and faster than delivery” as the primary motivation. Deloitte sees that as a sign that a permanent trend has taken hold.

“Consumers won’t necessarily snap back to old habits,” affirms Stephen Roger, executive director of the Deloitte Insights Consumer Industry Center. “As consumers learn more and experience more, we’ll gradually get back to traveling, or mingling among large groups, but it likely won’t be at the pre-pandemic levels. Other shifts are more systemic, such as working, cooking and streaming from home, and convenience through online commerce. They are likely here to stay.”

Why We’ll Keep Eating at Home

Americans’ kitchens have never been so well equipped, a fact that bodes well for a continuation of the cooking-at-home trend. While consumer surveys point to optimism and a desire for pre-pandemic behaviors, shoppers continue to purchase housewares at a blistering pace, according to The NPD Group. Dollar sales of small appliances and housewares grew 46% and 38%, respectively, in January. Those gains follow a year in which sales of those categories surged 25% to $53 billion.

“Consumers have been spending more time at home than ever before, and that continues to be true through much of the first quarter of 2021,” says Joe Derochowski, home industry advisor at Port Washington, N.Y.-based NPD. “As we mark the first anniversary of the COVID-19 pandemic, there is optimism that we’ll be able to return to some semblance of normalcy soon. Looking ahead, the home industry’s challenge of driving continued growth can be supported by helping the consumer adjust to the next phases of at-home living.”

According to NPD, the top categories based on dollar sales growth in 2020 were cookware, air purifiers, air fryers, toaster ovens, robotic vacuums and deep carpet cleaners.

It can be incredibly hard to forecast future shopper demand as a result of the uncertainty caused by the pandemic. That’s one of the reasons that most publicly held retailers suspended sharing financial guidance with investors during the pandemic, and that many remain reluctant to do so.

“Post-pandemic, many shoppers will continue with the new habits they’ve developed, particularly those who have changed the most,” was the assessment of Acosta, a full-service sales and marketing agency in the CPG industry, after surveying shoppers around the first of the year.

In a report, “COVID Consumer Journey: Passive to Panic,” the Jacksonville, Fla.-based firm broke down changes in shopping behaviors among four distinct consumer segments: Staying the Course, skewing toward younger, employed males; Social Distancers, skewing toward employed Millennials and/or Millennials with children; Hunkering Down, leaning toward older and retired or unemployed individuals; and Panic Button, more likely to be Gen Xers with children, or older individuals with no children.

“While we’ve seen significant growth in the number of consumers stocking up, shopping less and buying more online, our research indicates COVID concern level directly corresponds with changing shopping habits,” notes Colin Stewart, EVP of business intelligence at Acosta. “In fact, 94% of the individuals in our Panic Button segment, which reported the highest COVID concern level of 8.6 out of 10, stocked up on groceries, while only 30% in the Hunkering Down segment, with a lesser concern level of 7.4, did so. Similarly, 63% of the Panic Button segment shopped more online during the pandemic, while only 25% of the Social Distancers, with a concern level of 7.7, changed this behavior.”

No Shortage of Surveys

The great uncertainty regarding shoppers’ future behaviors has led to a surge in efforts to assess their intent based on the continuation of new behaviors adopted during the pandemic. For example, a survey of 2,017 respondents, conducted in March by NCSolutions, affirmed what sales data showed. There was a 14% increase in American household grocery spending since the start of the pandemic, 47% of whom said that they’re eating healthy food and 32% of consumers don’t plan to go back to pre-pandemic rates of cleaning.

“The big question on everyone’s minds is: Which of these newly formed behaviors will stick? Looking back at history, we see numerous examples of behaviors changing post-crisis,” says Linda Dupree, CEO of New York-based NCSolutions. “After the excesses of the Roaring Twenties and the poverty of the Depression, for instance, many people became extremely cautious about money. Some went as far as to save money in their mattresses – behavior that lasted for decades. We expect Americans to sustain their higher interest in CPG products and activities that foster self-care and well-being – both physical and emotional – for some time.”

Other Key Categories at a Glance 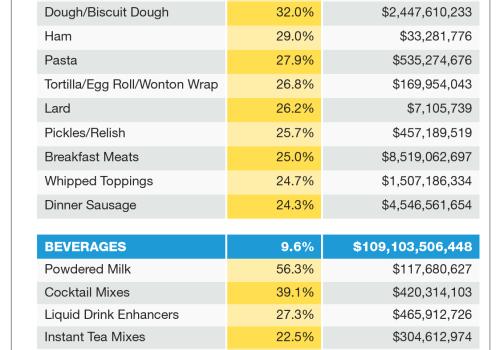 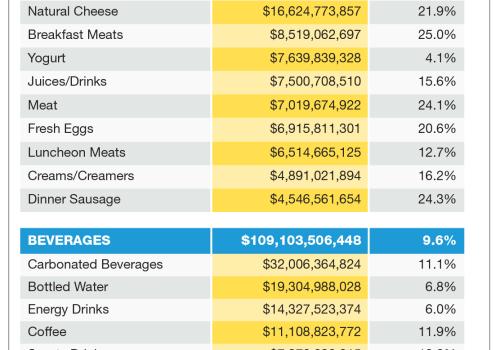 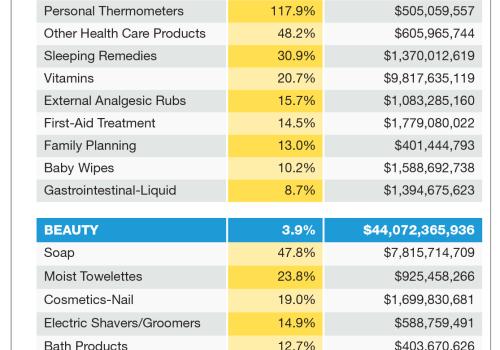 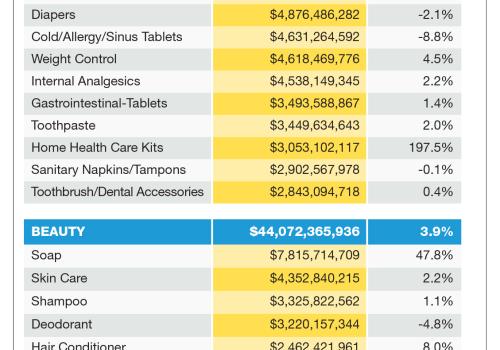